The Dashavatara part 1 : Story of Birth of Krishna and era of Dharma and karma 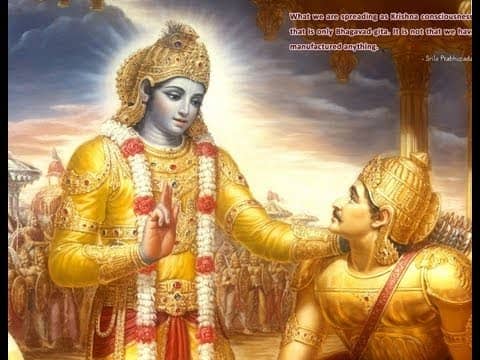 Whenever Dharma, the situation of law and order, is endangered on this world, Lord Vishnu incarnates onto this world to re-establish Dharma, and to protect noble souls and to destroy the evil elements of the society.
The eighth such incarnation was Krishna, which is one of the most powerful of ten incarnations of Lord Vishnu. What we know about the life of Krishna comes from two sources, the Srimad Bhagavatam, and the Mahabharata. The Mahabharata deals with a family called the Pandavas and their cousins, the Kauravas.
In the Mahabharata, there is a dialogue between Krishna and his disciple Arjuna, which is called Bhagavad Gita. 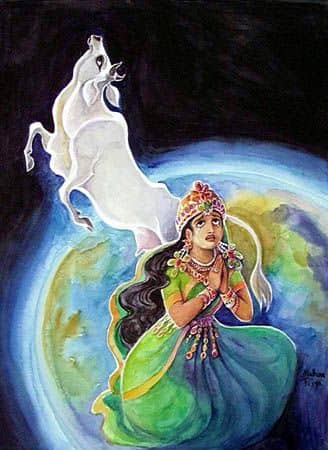 The fascinating early life of Krishna is covered in the Bhagavatam, and is our current topic of interest. Story of the Lord Krishna’s Birth Once, Mother Earth, unable to bear the burden of sins committed by evil kings and rulers, appealed to Lord Brahma, the God of Creation, for help. Brahma prayed to the Supreme Lord Vishnu, who assured Him that He would soon be born on earth to annihilate tyrannical forces. One such evil force was Kamsa, the ruler of Mathura in northern India. His people were utterly terrified of him. He had overthrown his own father King Ugrasena so he could become King of Mathura. Devaki was the princess of Mathura, and beloved sister of Kamsa. She got married to a noble young man, King Vasudeva of the Yadu dynasty. After the marriage ceremony, Vasudeva’s chariot was ready to take Devaki along with him to his home. As Kamsa was very fond of his sister, he declared that he himself would drive the chariot to Vasudeva’s house.  While Kamsa drove the chariot bearing Devaki and Vasudeva out of the Mathura, a voice boomed from the heavens. It informed Kamsa that Devaki’s eighth child would be his slayer. On hearing this, Kamsa got anxious and angry. He wanted to kill Devaki, his own beloved sister. Afraid of the ill intentions of Kamsa, Vasudeva pleaded with him not to kill Devaki. He promised to Kamsa that they would hand over all their children to Kamsa if he feared that one of them would kill him. Kamsa accepted the words of Vasudeva but did not let them go free. He put them in his palace prison. Whenever a male child was born to the couple, Kamsa would come to the prison and kill the child by smashing his head on the prison wall. Because  he was so evil, Kamsa was not moved by the painful cries of the parents. This happened to the first seven children of Devaki and Vasudeva, all of whom were boys. 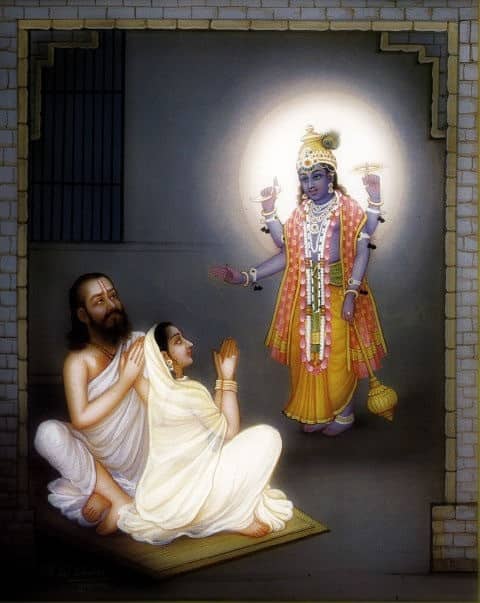 Now Devaki was expecting her eighth child. When she was about to deliver her baby, she and Vasudeva both heard an Akashavani (voice from the sky) which told them that they must take their child to Gokul and exchange him with the new born daughter of Nanda, the cowherd king of Gokul.  They were told by the divine voice that their son who was about to take birth was the incarnation of Lord Vishnu. He would eliminate evil on the earth and protect the innocent people. The voice said nothing could stop Vasudeva from taking his son to Gokul and coming back to the prison with Nanda’s daughter. When Devaki gave birth to her eighth son, all the guards magically went to sleep and the doors of the prison opened automatically. Vasudeva and Devaki were freed from their shackles. 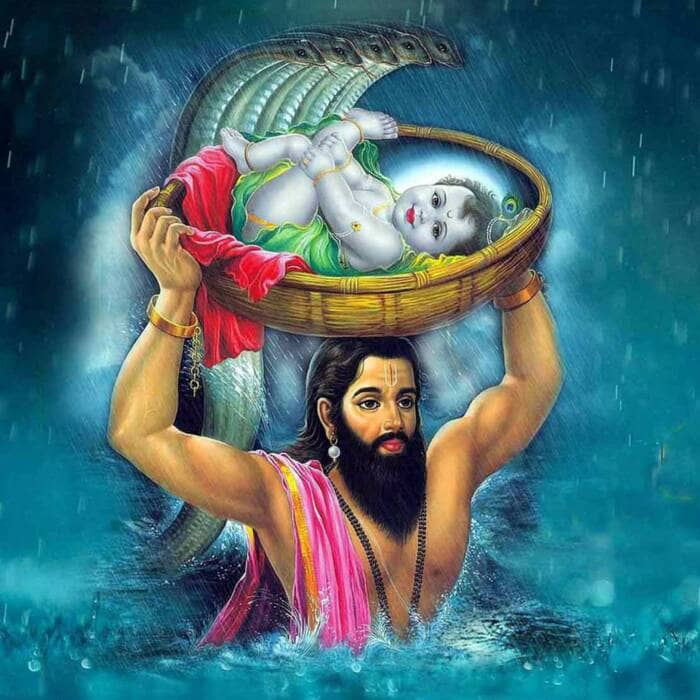 It was raining heavily and Vasudeva had to cross the river Yamuna to reach Gokul. The river was in full spate. Vasudeva took a bamboo basket and placed his son in it.
As Vasudeva stepped out and stood at the bank of river Yamuna, he was worried about his child but then was reminded of the divine voice that promised him that nothing bad would happen to the child. Vasudeva stepped into the river Yamuna submerging half his body in the cold water.
As he looked upwards, he saw a five mouthed snake providing protection to his baby against the torrential rain! On reaching Gokul, Vasudeva found the doors of Nanda’s house open and everyone in deep sleep. He took the baby girl of Nanda from beside her mother Yashoda and put his own son there. Then, as he had brought his son, he took the girl through the river. The five mouthed snake protected the girl, just as it had Krishna. 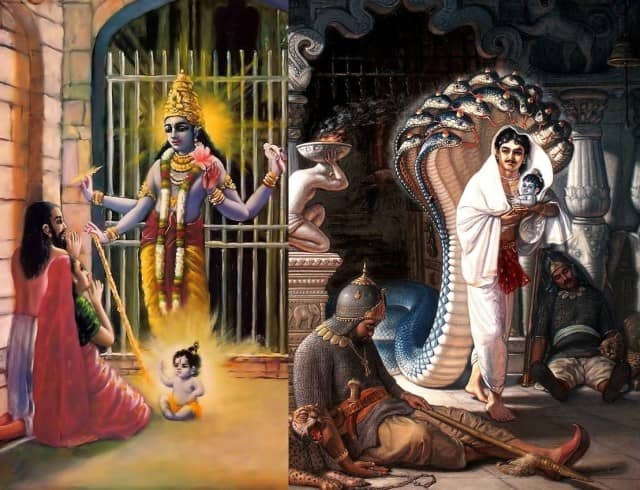 When he reached back home in Mathura, he entered the prison, and everything got normal as before – he and Devaki were put back in their shackles, the prison doors closed, and the guards woke up. As soon as the guards saw a child beside Devaki, they informed Kamsa. Kamsa, who had waited all these years to kill the eighth child of Devaki and Vasudeva, came hurriedly to get rid of his destined slayer. Like always, he picked up the baby girl and threw her against the wall but this time a miracle happened. 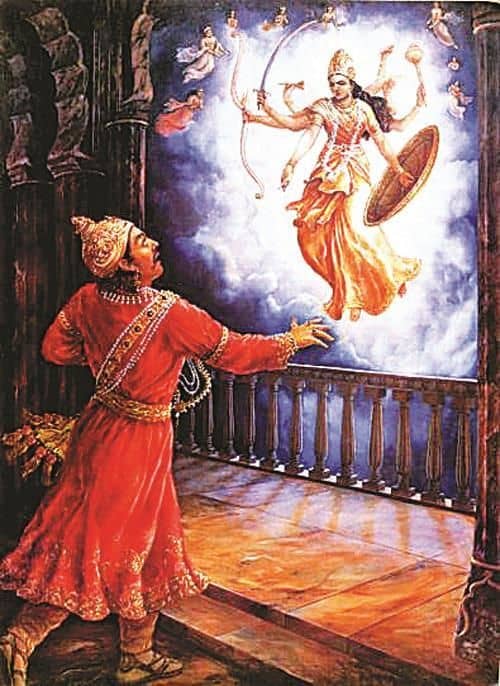 The little baby slipped from his hands and flew up into the air and took the form of the goddess, Yogamaya. She said to Kamsa, “You want to kill me but the one who will kill you has taken birth and is safe somewhere out of your reach. One day, your slayer will come searching for you and kill you. This is your destiny and you cannot change this!” Saying this, she laughed and vanished leaving behind the angry and dumbstruck Kamsa.
Nanda’s wife was Yashoda. Like Devaki, she had also given birth that night. She had fainted at the time of her delivery. When she came to her senses next day morning, she found a beautiful little baby lying by her side. Here was a joy beyond words, for the world had never seen such a lovely child before. 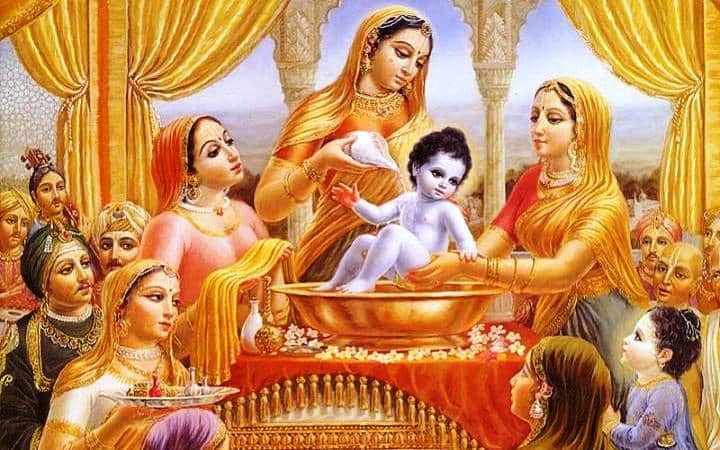 His skin was deep blue in color. The entire village came to know that in Nanda’s house was born a most heavenly child. Nanda was the chief of the Yadava clan. Since Nanda and Yashoda were not having any children, for quite some time, the birth of the boy made the people of Gokul wild with delight and joy. The boy was named
Krishna with appropriate rituals. Krishna means “the dark skinned one.”Every year, we celebrate a festival the day Lord Krishna was born, called Krishnashtami.
The festival is also called in different names as Sri Krishna Jayanti, Janmashtami, and as Gokulashtami.
Birth of Krishna Story

The story of Lord Krishna Around 5000 years ago, King Ugrasen ruled the small Indian village of Mathura. He was loved by all of his people, and raised two very fine children, Kans and Devki. As his children grew older, they both went their own ways. Kans jailed his father, and was the new King of Mathura. He still loved his sister, Devki, with a lot of heart, and got her married to an army officer, called Vasudev. On the day of their wedding, Kans found out that Devki’s eighth child would be born to kill him. For that reason, he though it would be wise to kill his sister Devki. Vasudev was very dear to Devki, and would not let this happen. They then came to an agreement that Kans will prison them, and let them live. But, they have to hand every child to Kans, so it can be killed. Kans had succeeded in killing all of Devki’s six children, and her seventh child, was transferred into Rohini’s womb. Being the second wife of Vasudev, Balram was then born to her, and Kans was fooled into thinking that Devki had a miscarriage.

Krishna grew up to be the son of Nand and Yashoda, and as destiny had predicted, he killed his uncle Kans, and all of Mathura was saved from his rule. Janmastami By Ami Gadhia Janmastami the festival Janmastami comes 8 days after the full moon of the Shravan month and it celebrates the birth of Lord Krishna. Many devotees begin fasting from ‘Sataam’ till the midnight of Krishna’s birth, where it is broken by tasting the ‘Prashad’ that was offered to him. There are two types of fasts; Nirjal fast is where they do not even have a drop of water on this day. They feel it will take them closer to God. The other fast is Phalahar Vrat, where only milk and fruits is eaten on this day. Salt and Cereals is also avoided on this day. People feel that it is the only thing that they can offer to God. Fasting is accompanied by singing bhajans throughout the day. Traditional sweets, made out of milk and butter are also eaten on this day, being one of Krishna’s favorite dishes. “Jhanki” means peeping into ones life. In this case, the moments of Krishna’s life is relived. People or Dolls are dressed up as Krishna, Devki and Vasudev.

There are five scenes that are usually reconstructed. These are the birth of Krishna, Vasudev carrying Krishna safely across River Yamuna, His return to jail, the killing of Yashoda’s daughter and Little Krishna in his cradle in Gokul. The people that dress up are not seen as humans at this moment, but a representation of the Lord. The festival of Janmastami can go on for a number of days, as per family tradition. So, on the second day, the ladies usually wake up early to make a paste out of rice flour, and imprint footsteps coming towards their door.
This symbolises Krishna’s footsteps into his foster home. The ‘Dahi Handi’ ceremony also takes place later on this day. It consists of a clay pot being filled with milk, dry fruits and ghee, hung up on a rope above the ground. Many form a human pyramid to break the pot, and the people around throw water on them, trying to stop them. Many believe that a broken piece from this pot will keep away negative powers.
Source and Reference
Internet/wikipedia
BHAGAVATAM – Lord Krishna’s Birth
Birth of Krishna Dashavtara Krishana Latest Articles Rakesh Jamwal Spiritual sciences Spirituality
Share article:
Decoding Cosmic Vibration of the year 2018 : Transit Analysis of February 2018
Mahashiv Ratri - The divine and mystic Night of Shiva and Shakti for spiritual evolution's of sadhaka's 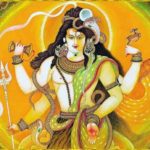 The Greatness of Saturn- Part 1 : Magnificent Aspects of the Saturn Influencing human being Astronomically and philosophically explained