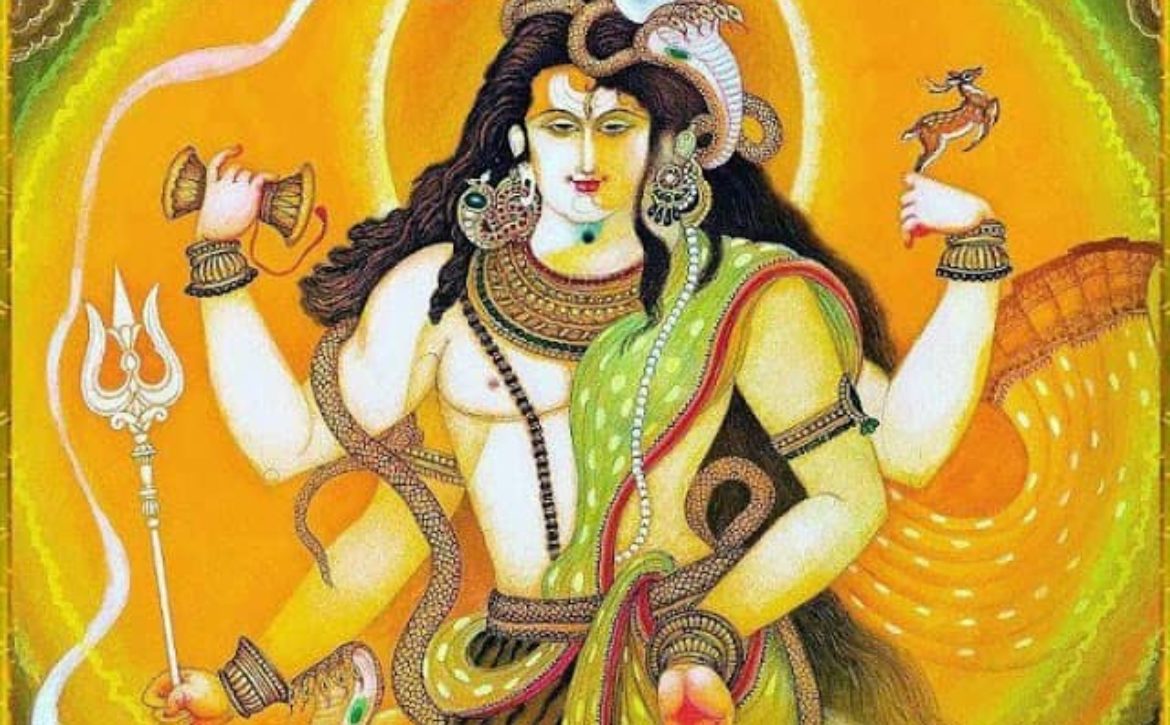 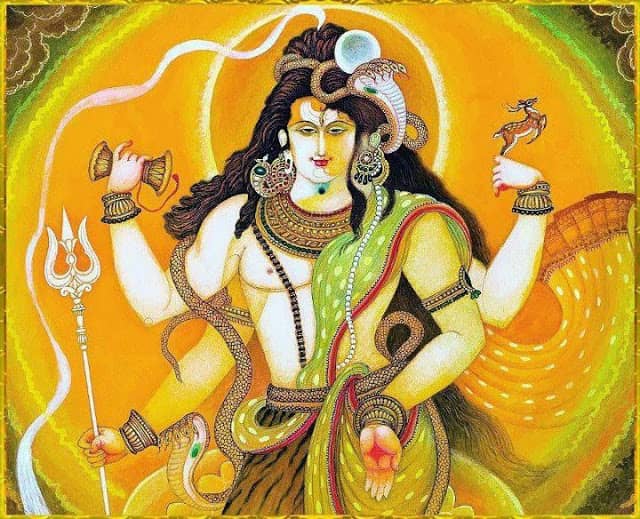 I salute the merciful Bhava (i.e. Shiva), and his consort Sati, Adorned with the necklace of the serpent.

Pure White like Camphor, an Incarnation of Compassion,
The Essence of Worldly Existence, Whose Garland is the King of Serpents, Always Dwelling inside the Lotus of the Heart.
I Bow to Shiva and Shakti Together.
Karpur Gauram : The one who is as pure as camphor(karpur)
Karuna avatar : The avatar full of compassion
Sansara Saram : The one who is the essence of the world
Bhujagendra haram: The one with the serpent king as his garland
Sada vasantam : Always residing
Hridaya arvinde : In the lotus of the heart
Bhavam Bhavani : Oh Lord and Goddess (Sati: wife of Shiva)
Sahitam Namami : I bow to you both

The Legend of Ketaki Flower

The Ashutosh is fond of flowers like hibiscus, stramoni flower (dudura), dhak (palasha), arakha, cape-jasmine (sugandha-raj) and of course the screw-pine or ketaki. However, ketaki, is offered to the Lord only once in a year; on the occasion of Maha Shivaratri. The story behind this is quite an interesting one.

Retired bank manager Dayanidhi Dash shares the legend of the Holy Trinity and the screw pine. Once the Holy Trinity challenged each other to determine which one of them is the most efficacious. Lord Shiva assumed the form of a rock phallus of immense magnitude (the shiv ling) and the Lords Brahma and Vishnu set out to find out its limit. While Lord Brahma assumed the form of a swan and travelled upward, Lord Vishnu took the form of a boar and explored down. Both searched and searched but there was no end to the divine vastness.

Meanwhile, a tired and irritated Brahma came across a falling flower, a screw pine. When asked about the upper limit of the ling, the flower confessed that it had no idea, as it had fell from the Lord’s head ages back but was yet to reach the ground. In his extreme arrogance, Brahma conspired with the flower and made it a witness to his lie. He came back from the heights and found a tired Vishnu at the base who confessed about not being able to find the end of Rock Phallus. But Brahma, backed up by the screw pine, announced that he had discovered the head of the Shiv ling and plucked the flower from there. At that instant, Lord Shiv appeared to put an end to this folly and cursed both Brahma and Ketaki flower. Brahma was to remain un-worshipped while screw-pine was never to be used in any sacred rituals. However, after much pleading, the rudrasanctioned Brahma one place of worship (the Puskara) and ketakigot the chance to be used in rituals only one day in a year (the Maha Shivaratri).

Mahashivaratri (the great night of Shiva) falls on the fourteenth day of the dark fortnight of -Magha-Phalguna (February- March), and is dedicated to the worship of Lord Shiva. On this day devotees sing bhajans in honor of Shiva, recite Sanskrit shlokas (verses) from scriptures, offer prayers in the morning and evening, observing fasting throughout the day.
Offering Bilva leaves to Shiva on Shivaratri is considered very auspicious by his devotees.

Maha-Shiv Ratri Purpose is to achieve eternal peace and happiness by worshipping Shiva at night, by meditating on one’s own self during the night when the individual is free from the distractions of the physical world. When the individual attains self-knowledge, he or she can live in the world without being affected by anger, greed, and selfishness, the three enemies of one’s soul. Shiva-ratri symbolizes the worship of the atman within.

According to vedic astrological system, Mahashivaratri is considered as one such day when spritual energy in nature is too high to connect with the divine shiva to achieve spritual growth for the higher transformation. It is conducive to spiritual growth and meditation.

On the specific night of Shivratri, the planetary placement is such that there is a natural tendency for the kundalini energy, housed in the chakra at the base of the spine, to rise up and reach the chakra at top of the head.

Meditation helps to reach at a point when we can experience space of nothingness and love. This experience takes us to the level of higher consciousness, that stage only a siddh yogi achieve via going into depeest state of meditation, that is called state of the Shiva- The Adhi-Yogi (The One).Shivratri is that night which is meant for spiritual seekers for connecting with the divine Nature.

Mahashivratri is the day when the Shiva Tattva (Guru Tattva- Akash – Eternal Knowledge – Braham) is believed to come in contact with the divine earth (Prakarti- Shakti –  Prithvi Tattva – Material). It is believed that during divine night of Maha-Shivratri our higher consciousness, aura, increases ten inches above the material ground or expands in a wide spritual plane. Our Chakaras get align with the nature energy and a sadhak can reaches to the height of Higher chakra – the chakra of One – OM.

On this day, consciousness descends and touches the Prithvi Tattva.
That is why Mahashivratri is celebrated across the universe – it is the day of  wedding of  Shiva and Shakti (the Twin Particle of Prithvi and Aakash Tattva) the material world (Earth) with the spiritual world ( Brahmand).Sivaratri is a blessed occasion for all to practise self-restraint, self-control, contemplation, Svadhyaya, Japa and meditation, as much as possible within our capacity. We have the whole of the night at our disposal. We can do Japa or we can do the chanting of the Mantra, ‘Om Namah Sivaya’. We can also meditate. It is a period of Sadhana. The glory of God is displayed before us in the form of these spiritual occasions.
Read More