Humans born on this earth plane, with a purpose of; learning quickly yet steadily, consequently leading to purification of soul and pay off the karma, wherein we are subjected to many problems and situations, but also carry the knowledge from former birth(s), wherein the energy (positive or negative) is absorbed into the soul.

In any given birth chart (represented by D1), the position of the nodes (Rahu and Ketu) provide information about the karma(s) which have been carried from earlier birth(s) and redefines itself to the karma that would have to be undertaken in the current birth.

Rahu represents the paradigm, where efforts have to be channelized in this birth and Ketu embodies the arena, which signifies the sanchit karma from past birth(s).

Considering the example of Rahu in Aries in 3H and Ketu in Libra in 9H, the following can be predicted/deciphered: Rahu is in the sign of Mars and Ketu is in the sign of Venus. Implies that, Mars, here, will act as the karma distributor while Venus will perform the duty of karma control.

Ketu in 9H demonstrates that the native had been a spiritual and a religious personality, undertaking long journeys in past birth(s). Therefore, the native is carrying the spiritual nature, related experiences and the shades of international attire in behavior and various other aspects. Supposedly, if Venus is in the 4H, represents that native will have a beautiful wife which will be a good match in all perspectives. 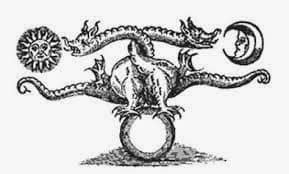 Hence, the position of nodes can give a direct hint of karmic pattern. Simultaneously inference can bedrawn that life on earth plane is a journey from the Rahu to Ketu, which is moving from the materialistic world of illusions to the universal globe of liberation.
Through this article, I wish to enlighten the readers, about the fear and myths created by modern day astrologers regarding the nodes. I humbly urge each one of you to handle the karmic pattern and explore yourself.
Stay Tuned- Coming Up Next- “The Earth’s Ascension Revealed”