How to worship Goddess laxmi, Kubera, Yamdeepak and Dhanvantri in Dhanteras on 17th october 2017 at home 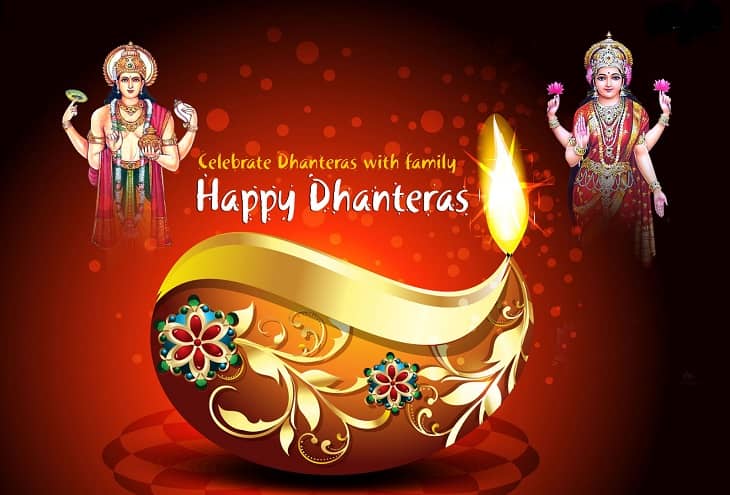 As per wiki, Dhana Trayodashi (or Dhanteras or धनत्रयोदशी) is the first day of the Indian Diwali and Nepalese Tihar Festival. The festival is known as “Dhanatrayodashi” or “Dhanvantari Trayodashi”. It is celebrated on the thirteenth lunar day of Krishna Paksha (dark fortnight) in the Vikram Samvat Hindu calendar month of Kartika month.

This day is also celebrated for Lord Dhanvantari (Deity who rules Ayurveda) and worshipped on the occasion of Trayodashi, usually, this day is called Dhanvantari Trayodashi. Dhanvantari is considered to be the teacher of all physicians and the originator of Ayurveda.

‘Dhan’ means wealth and ‘Teras’ refers to the thirteenth day of the moon cycle on the thirteenth day of Kartika Krishna Paksha. On this auspicious day, Goddess Laxmi, Lord Dhanvantri and Lord Kuber are worshipped in sthir Lagna at evening time. Traditionally it is considered as to be good in Hindus to buy gold and silver jewelry or utensils as they are karka for Vaibhav.

If we See background history from our Vedic Scriptures                   (Puranas), root of the Dhanteras belong from the Samudra Manthan, It is believed that on this day, Goddess Lakshmi emerged from the ocean along with other precious treasures and pieces of jewelry, during Churning of Ocean. According to the Bhagwat and Visnu Purana, Lord Dhanvantri also emerged from the sea with the pot of Amrit for distributing it to the Devtas. Lord Dhanvantri is another form of Lord Vishnu and also worshipped on this day along with Goddess Lakshmi and Lord Kuber for the good health, wealth, and wellbeing.

Below are Detailed info on Dhanteras Puja Vidhi and Muharat : 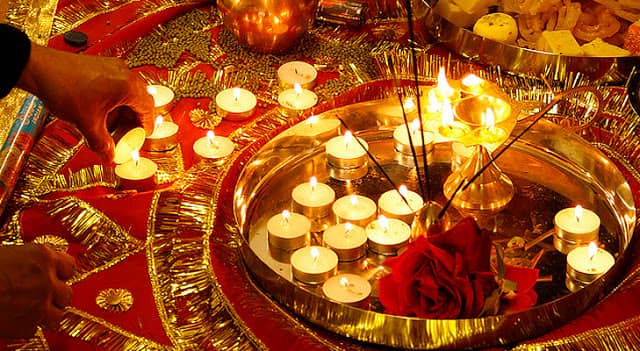 Dhanteras Puja Muhurta = 19:21 to 20:25
Duration = 1 Hour 4 Mins
Pradosh Kaal = 17:51 to 20:25
Vrishabha Kaal = 19:21 to 21:14
Trayodashi Tithi Starts = 00:26 on 17/Oct/2017
Trayodashi Tithi Ends = 00:08 on 18/Oct/2017
According to Drikpanchang, Lakshmi Poojan on Dhanteras should be done during Pradosh Kaal after sunset and approximately lasts for 2 hours and 24 minutes when Sthir Lagna (Fixed Signs) prevails, Sthir means fixed, not movable as in Sthira Lagna goddess Laxmi sits and stays in your home. Today Sthira Lagna will rise after 19:21 (Taurus Lagna), hence this time is the best for Dhanteras Pujan for Laxmi poojan.

But before that there we need to light 13 or 1 lamp in the house to keep away the evil and let the good light come in in the form of good health and wellbeing with Goddes Laxmi and Dhanvantri.Dhanteras has nothing to do with the wealth,  but It is more about the health and well being of the house, what happens when “Ashta Laxmi” comes in the house with lord Dhanvantri which brings good health, well being and overall happiness for the whole family members. ‘

It Has a deep story, as why we lit lamp on Dhanteras for Lord Yama;

” This is explained in the story of the prince and his new wife, which is said to have happened on this day centuries ago. The prince, his new wife and the serpent The 16-year-old son of King Hima was predicted to die on his fourth day of marriage – on Dhanteras – by snake bite.

But instead of dying, on that date his wife decided she would not let him go to sleep. She laid out all her ornaments as well as pots of gold and silver coins at the entrance to their bedroom and lit lots of lamps.

She told him stories and sang songs to keep him awake that night and when the God of Death, Yama, came disguised as a snake, he was so dazzled by the glittering precious metals and lights that he climbed on top of the coins and listened to the stories instead. By morning, rather than killing the prince, he slithered away silently because he had missed the chance. The prince was saved by his bride after she baffled the snake with her wealth.”

That’s why in Dhanteras first it involves worshipping of Lord Yama with Deep Daan on this day for the protection of one’s family members and loved ones.After worshipping Lord Yama one should Lit 13 earthen Lamps on the honor of Lord Yama in a southern direction with sesame oil outside the house in evening time in pradosh kaal.
Below are the Step by Step Process first from Lighting earthen lamp in evening time for Lord Yama Deepam Daan.

Step -1 – Worshipping of Lord Yama in Pardosh Kaal in evening 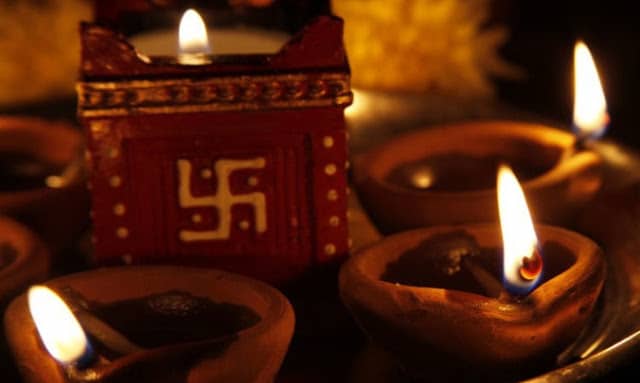 Yama Deepam Time = 17:51 to 19:08
Duration = 1 Hour 16 Mins
(Source, Drikpanchang.com, http://www.drikpanchang.com/diwali/yama-deepam/yama-deepam-date-time.html)
1. Take a small wooden slab with small legs.
2. Make a swastik with roli on it.
3. Now put 13 or 1 earthen lamps on it fill it with sesame oil and light the earthen lamps.
4. Now take a cowry shell with hole and put it into earthen lamps.
5. Shower water (Gangajal or pure water) around lamp 3 times.
6. Put tilak of roli on lamp. Then put raw whole rice on tilak.
7. Offer some sugar to it. (Just put some sugar in the lamp).
8. Put 1 rupee coin in it.
9. Now offer some flowers to lamp.
10. Do pranam to earthen lamp.
11. Offer tilak to family members.
12. Now place this lamp outside main gate of your house. Place it on right side of door. It’s flame must face towards south direction.
After placing this earthen lamp recite the following mantra and offer honor and respect and pray to the Lord Yama for well being of the family members: 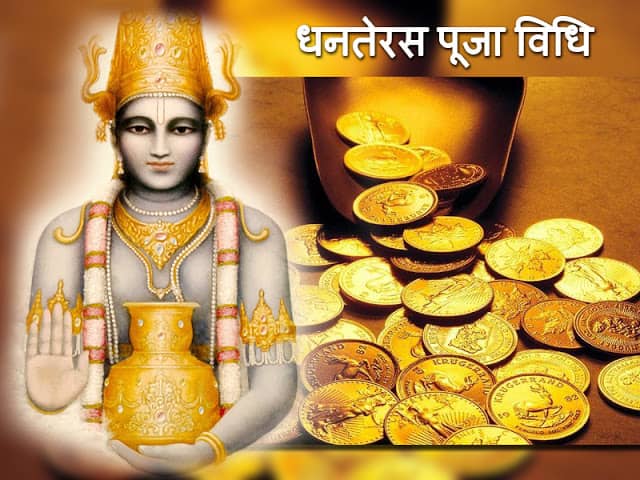 After lighting earthen lamp for Lord Yama, one should start dhanwantari pooja in your pooja room. Lord Dhanwantari is diety of the Ayurveda, form of Lord Vishnu, as he has emerged on this day so he should be worshipped in Dhanteras. Give bathing and anointing the idol of Lord Dhanwantari with vermillion, nine varieties of grains are offered to the Lord.

We pray to God, who is Sudharshana Vasudeva Dhanvantri. He holds the kalasha full of nectar of immortality. Lord Dhanvantri removes all the fears and diseases. He is the well-wisher and preserver of the three worlds. Like Lord Vishnu, Dhanvantri is empowered to heal our souls. We bow to the Lord of Ayurveda.
After the end of recitation, Say,

“O Lord Dhanwantari! I offer this recitation in your lotus feet. Please give us good health.” 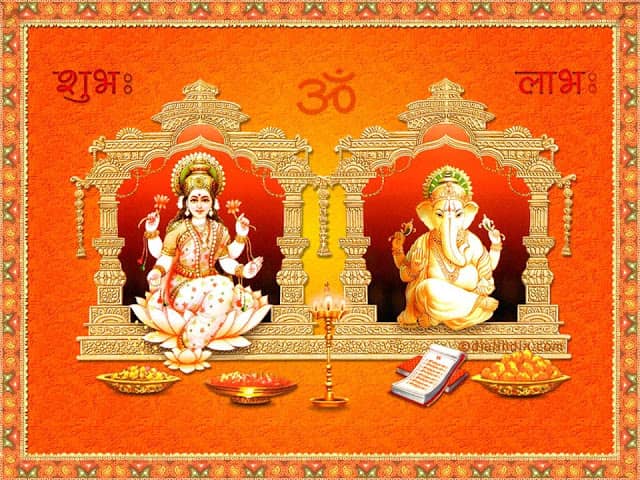 After Dhanwantari pooja one must do panchopchar pooja of Lord Ganesh and Goddess Lakshmi with Kubera.In the evening, all family members should gather and start the prayer.Before Starting pooja give him a bath and anoint him with sandal paste. A red cloth is offered to the Lord and then fresh flowers are showered on the idol of Lord Ganesha. Devotees can also chant the mantra and take his blessings before starting the rituals of Dhanteras.

(I pray to Sri Ganesha) Who has a Curved Trunk, Large Body, and Who has the Brilliance of a Million Suns, O Lord, Please make all my Works Free of Obstacles, Always.

Now Worship Lord Kuber after the Ganesh Pooja as follows: 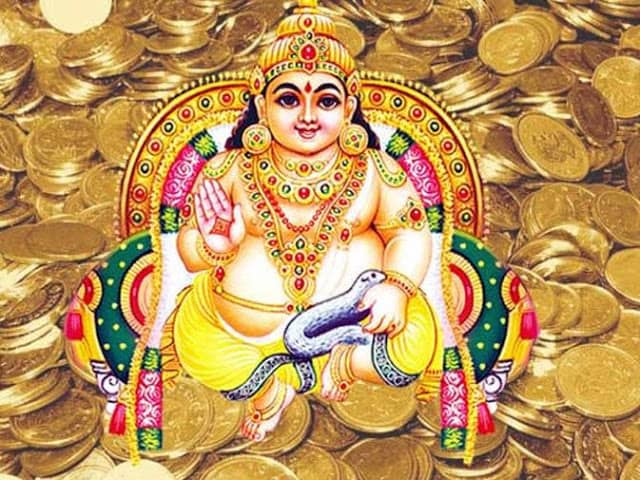 Lord Kuber should be offered flowers, incense, fruits and sweets, and diya and after that chant the following mantra:

Kubera, the lord of yakshas, bless us with wealth and prosperity. 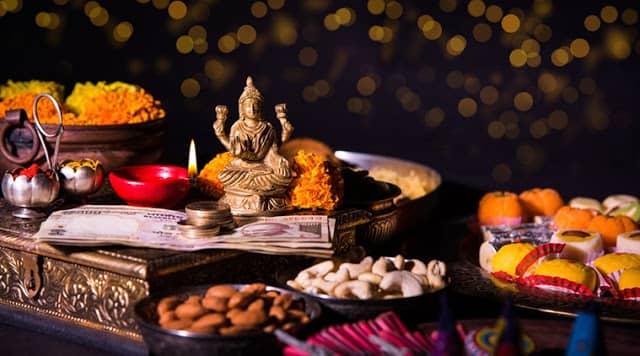 
In Dhanteras, During the Pradosh Kaal, which is the time after sunset and lasts for about two and a half hours, Goddess Lakshmi is used to worshipped on Dhanteras. Before starting this pooja ritual, one should take a piece of new cloth, spread with a handful of grains in the middle of the cloth. The cloth should be spread on a raised platform. A kalash half filled with water (mixed with Gangajal), betel nut, a flower, a coin and some rice grains is also kept together.

After this, take a plate and bathe the idol of Lakshmi with panchamrit (mixture of milk, curd, ghee, butter and honey).