Tribute to The Vedic Indian Science of Aeronautics ” Shivkar Bapuji Talpade – The Inventor of first plane ” Based on Yujar & Rig Vedas and the principals of Vaimanik Shashtras by Sage Bhardawaja. 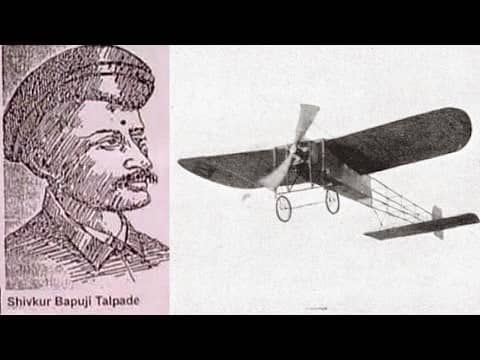 Over hundred years ago. In 1895, full eight years before the Wright Brothers` first flight at Kitty hawk, North Carolina, USA, Shivkar Bapuji Talpade and his wife gave a thrilling demonstration flight on the Chowpatty beach in Mumbai.The purpose of this article is to let the world know that the first plane in the modern era was made in India.

“The ancient Hindus could navigate the air, and not only navigate it but fight battles in it like so many war-eagles, combating for the domination of the clouds. To be so perfect in aeronautics they must have known all the arts and sciences relating to the science, including the strata and currents of the atmosphere, the relative temperature, humidity, density and specific gravity of the various gases…..” – Col. Olcott in a lecture in Allahabad in 1881.

Ancient Sanskrit literature is full of descriptions of flying machines – Vimanas. From the many documents found it is evident that the scientist-sages Agastya and Bharadwaja had developed the lore of aircraft construction.

The “Agastya Samhita” gives us Agastya`s descriptions of two types of aeroplanes. The first is a “chchatra” (umbrella or balloon) to be filled with hydrogen. The process of extracting hydrogen from water is described in elaborate detail and the use of electricity in achieving this is clearly stated. This was stated to be a primitive type of plane, useful only for escaping from a fort when the enemy had set fire to the jungle all around. Hence the name “Agniyana”. The second type of aircraft mentioned is somewhat on the lines of the parachute. It could be opened and shut by operating chords. This aircraft has been described as “vimanadvigunam” i.e. of a lower order than the regular aeroplane.


Aeronautics or Vaimaanika Shastra is a part of Yantra Sarvasva of Bharadwaja. This is also known as Brihadvimaana Shastra. Vaimaanikashastra deals about aeronautics, including the design of aircraft, the way they can be used for transportation and other applications, in detail. The knowledge of aeronautics is described in Sanskrit in 100 sections, eight chapters, 500 principles and 3000 slokas. Great sage Bharadwaja explained the construction of aircraft and way to fly it in air, on land, on water and use the same aircraft like a sub-marine. He also described the construction of war planes and fighter aircraft.

Vaimaanika Shastra explains the metals and alloys and other required material, which can be make an aircraft imperishable in any condition. Planes which will not break (abhedya), or catch fire (adaahya) and which cannot be cut (achchedya) have been described. Along with the treatise there are diagrams of three types of aeroplanes – “Sundara”, “Shukana” and “Rukma”.

Bharadwaja states that there are thirty-two secrets of the science of aeronautics. Of these some are astonishing and some indicate an advance even beyond our own times. For instance the secret of “para shabda graaha”, i.e. a cabin for listening to conversation in another plane, has been explained by elaborately describing an electrically worked sound-receiver that did the trick. Manufacture of different types of instruments and putting them together to form an aircraft are also described.


It appears that aerial warfare was also not unknown, for the treatise gives the technique of “shatru vimana kampana kriya” and “shatru vimana nashana kriya” i.e. shaking and destroying enemy aircraft, as well as photographing enemy planes, rendering their occupants unconscious and making one`s own plane invisible.

In Vastraadhikarana, the chapter describing the dress and other wear required while flying, talks in detail about the wear for both the pilot and the passenger separately.

Ahaaraadhikarana is yet another section exclusively dealing with the food habits of a pilot. This has a variety of guidelines for pilots to keep their health through strict diet.

Bhardwaja also provides a bibliography. He had consulted six treatises by six different authors previous to him and he gives their names and the names of their works in the following order : Vimana Chandrika by Narayanamuni; Vyoma Yana Mantrah by Shaunaka; Yantra Kalpa by Garga; Yana Bindu by Vachaspati; Kheta Yaana Pradeepika by Chaakraayani; Vyoma Yaanarka Prakasha by Dundi Natha.

As before Bharadwaja, after him too there have been Sanskrit writers on aeronautics and there were four commentaries on his work. The names of the commentators are Bodh Deva, Lalla, Narayana Shankha and Vishwambhara.

Evidence of existence of aircrafts are also found in the Arthasastra of Kautilya (c. 3rd century B.C.). Kautilya mentions amongst various tradesmen and technocrats the Saubhikas as `pilots conducting vehicles in the sky`. Saubha was the name of the aerial flying city of King Harishchandra and the form `Saubika` means `one who flies or knows the art of flying an aerial city`. Kautilya uses another significant word `Akasa Yodhinah`, which has been translated as `persons who are trained to fight from the sky.` The existence of aerial chariots, in whatever form it might be, was so well-known that it found a place among the royal edicts of the Emperor Asoka which were executed during his reign from 256 B.C. – 237 B. C.

It is interesting to note that the Academy of Sanskrit Research in Melkote, near Mandya, had been commissioned by the Aeronautical Research Development Board, New Delhi, to take up a one-year study, ‘Non-conventional approach to Aeronautics’, on the basis of Vaimanika Shastra. As a result of the research, a glass-like material which cannot be detected by radar has been developed by Prof Dongre, a research scholar of Benaras Hindu University. A plane coated with this unique material cannot be detected using radar.

But perhaps the most interesting thing, about the Indian science of aeronautics and Bharadwaja`s research in the field was that they were successfully tested in actual practice by an Indian over hundred years ago. In 1895, full eight years before the Wright Brothers` first flight at Kitty hawk, North Carolina, USA, Shivkar Bapuji Talpade and his wife gave a thrilling demonstration flight on the Chowpatty beach in Mumbai.

An even more astonishing feature of Talpade’s aircraft was the power source he used- An Ion Engine. The theory of the Ion Engine has been credited to Robert Goddard, long recognized as the father of Liquid-fuel Rocketry. It is claimed that in 1906, long before Goddard launched his first modern rocket, his imagination had conceived the idea of an Ion rocket. But the fact is that not only had the idea of an Ion Engine been conceived long before Dr Goddard, it had also been materialized in the form of Talpade’s aircraft.

Mr. Talpade, a resident of Mumbai, was an erudite scholar of Sanskrit literature, especially of the Vedas, an inventor and a teacher in the School of Arts. His deep study of the Vedas led him to construct an aeroplane in conformity with descriptions of aircraft available in the Vedas and he displayed it in an exhibition arranged by the Bombay Art Society in the Town Hall. Its proving the star attraction of the exhibition encouraged its maker to go deeper into the matter and see if the plane could be flown with the aid of mercurial pressure. For the one hundred and ninetieth “richa” (verse) of the Rig Veda and the aeronautical treatise of Bharadwaja mention that flying machines came into full operation when the power of the sun`s rays, mercury and another chemical called “Naksha rassa” were blended together. This energy was, it seems, stored in something like an accumulator or storage batteries. The Vedas refer to eight different engines in the plane and Bharadwaja adds that they are worked by electricity.

Mr. Talpade carried on his research along these lines and constructed an aeroplane. In his experiments he was aided by his wife, also a deep scholar of the Vedic lore, and an architect friend. The plane combined the constructional characteristics of both “Pushpaka” and “Marut Sakha”, the sixth and eighth types of aircraft described by Bharadwaja. It was named “Marut Sakha” meaning “Friend of the Wind”.

With this plane this pioneer airman of modern India gave a demonstration flight on the Chowpatty Beach in Mumbai in the year 1895. The machine attained a height of about 1500 feet and then automatically landed safely. The flight was witnessed, among many others, by Sir Sayajirao Gaekwad, the Maharaja of Baroda and Justice Govind Ranade and was reported in “The Kesari” a leading Marathi daily newspaper. They were impressed by the feat and rewarded the talented inventor.

Unfortunately Talpade lost interest in things after his wife`s death, and after his own death in 1917 at the age of 53 his relatives sold the machine to Rally Brothers, a leading British exporting firm then operating in Mumbai. Thus the first ever attempt at flying in modern India, undertaken and made successful by an Indian, in a plane of Indian manufacture and built to Indian scientific specifications, slid into the limbo of oblivion.