When can we Expect Rains in Northern Hemisphere of India ?

As per Our Recent Study, In the Below Mentioned Telescopic Image you can see Sun is very Close to the Equator Line and it is the Main reason Why these days we are Feeling So much Heat Waves in the Northern Region of India as Sun is moving More & More closer to the Equator lines where you can see Constellation of Taurus , Gemini and Cancer are already present which is clearly Telling me More the Sun moves forward to Cancer from Taurus to -> Gemini to -> Cancer (after 19th July 2014) India northern will feel More heat waves. 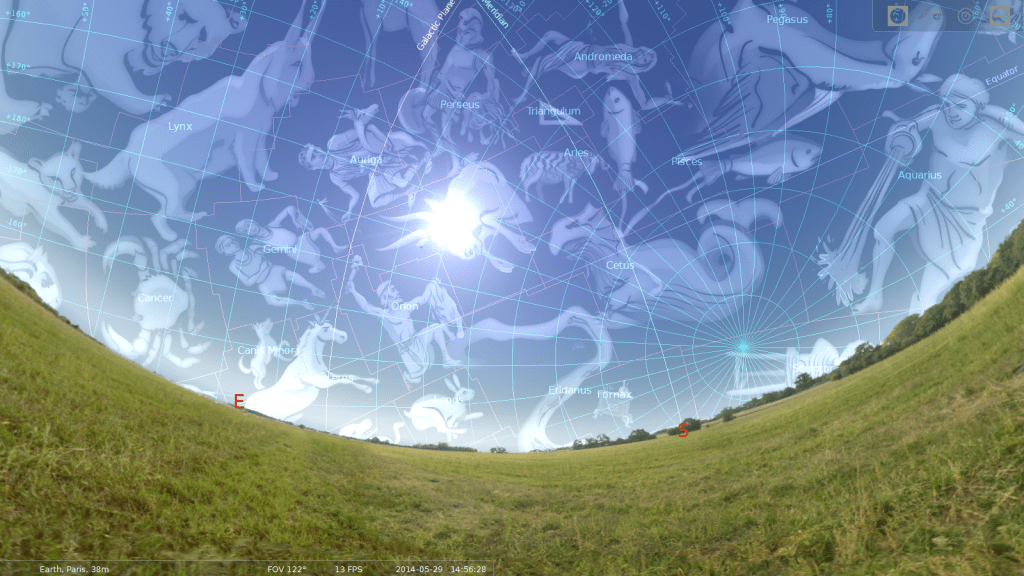 After 19th july we can experience much humidity in the Atmosphere and Temperature will be around 40-45 Deg but humidity will effect more as after 19th July Sun will be in Cancer Sign where Jupiter will transit too which Will be a Relieving point for the People of Tropical areas and the areas where Humidity is more in the atmosphere .

After June 16th 2014 we will experience Much Heat & windy waves in the atmosphere with Heat effect and there will be Sudden Rise in the Temperature too probably around about 45 Deg but with added Rains drops too as Sun is Going to Conjugate with Jupiter and Mercury will give Some Relief too in the Weather condition. Mercury gives windy waves with Sun and Jupiter try to Lesser down it too and When Sun goes farther from Mercury it gives Thunder Showering too.

Blue Line is the ” The Equator Line “where we can see all three Signs are Very closer to Sun. This is the Reason for Heat Waves in coming months. From 28th May to 30th May 2014 we can feel the effect too as Moon is Very closer to the Sun and this is the reason you are experiencing Sudden & greater Increase in the Heat waves and Humidity in the northern region of ( New Delhi , Jammu , Punjab , Up , MP and Haryana) after When Moon goes further we will experience lesser number of humidity in the atmosphere and you will experience a relief when it happen.

As Currently Sun is Very Close to Rohini Nakashtra in Taurus Sign and Lord of Rohini Nakashtra is in Leo Sign too with out any contact of Mercury So we can Expect there will be much Heat waves Awaited for India’s Northern Sphere as sun is now in 2nd Quarter of Taurus which is lie in around about ” 72 Degree Longitudinal ” from Earth Prime Meridian distance, and Because of this all the cities which are lies in 72 Deg Longitude are getting effected more by the Sun Solar Activity.

The Main Reasons of we are not Getting any Rain and Heat waves are much is only One as we are not seeing any contact of Closeness of moon with Mercury with respect to earth Gravitational pull which can change the earth weather condition.

But we can Expect there will be Lots of changes in weather condition sooner after Jupiter will Move Into Tropic of Cancer on 19th June 2014 and Same time Saturn also going to aspect Jupiter too so we can expect there will be much Relaxing weather conditions after 19th June 2014 as Saturn also help to Settle down the Earth heating atmosphere by making point of contact with Jupiter else Jupiter alone cant bring any change in earth but with Saturn and Mercury Contact it can make it much cooler soon .

As Jupiter has Bigger mass than earth and having much effects on earth atmosphere due to strong magnetic pull it can give to earth and Sun and hence can influence the solar activity more in Sun.

So, Combo of Jupiter-Sat will sure gone cool down the earth atmosphere Sooner after 19th june 2014.

Exact Point of Rain will be after 26th June 2014 exactly after @ 3:00 Pm When Moon will going to enter Gemini Sign with Mercury in Same Nakashtra (Mrig-Shara – whose Nakashtra is Lord Ketu which has capability to Bring sudden changes in weather conditions ) in a very closer degree.

States which are going to effects from these transits are , New Delhi , Punjab , Jammu and Kashmir , Himachal Pardesh , Rajasthan , haryana and Gujraat.

True Monsoon Season will Soon going to hit in between 22 july to 22 August in most of the North India region Including UP , Punjab Western region of Jammu , Delhi ,Haryana , Mid of India including Gujraat , Bihar and Bhopal when Exactly Sun move into Cancer Sign with Jupiter ( Two Hot Bodies will eat all the water in rivers ) after 16th July 2014 and than there will be lots of Evaporation in Coastal areas and it will produce lots of Condensation work for Idle & empty Clouds and it will effect most of the North-East India Regions and people will feel its result soon in the form of Heavy Rainfalls , High Humidity and Lots of Sweat around the environment & People AC’s start gone work now after this Joke apart.

Nature will show its true color of humidity around about More than 95% and after tomorrow movement and finally we can observe the effect of Monsoons Soon after 16th july 2014 when Moon , Mercury , Jupiter and Sun going to Conjugate closely.

Mars and Saturn Quadrangle Position also going to add Some mirch masaals too in this may be you can experience Some Sudden floods, Sudden Dust storms , thunderstorms or Windfall and can lead into some destruction too in Northern & Eastern regions of India may be in uttrakhand , UP , Bihar , Assam , Bhopal etc and all those states which are much closer to the Center of India and as their signs and degrees are much closer to the center of india ( Cancer line – Where Current transit is effecting much ) & as per the ” Koorma Chakara ” drawn for india you can easily trace locations for these regions and because of their Degree effects will be much more on these areas by both Sun and Jupiter.

Gujraat and all the neighboring countries i.e Pakistan , Iraq , Afghanistan etc which are also very Close to the Gujarat have to Suffer much too by this conjugation and can experience sudden dry atmosphere , sudden Droughtness and heaty environment also.

But Soon this Drought Atmosphere going to wash away in most of States of India for @1 month because of this conjugation effect and there will be more than average rain from earlier months although it would be lesser than previous years but still Rain will be much better not as per our expectations but still it will be better than earlier months.

People will purely enjoy Monsoon’s Season around about ” 22 July 2014 to 22 August 2014 ” Usually Monsoon reach in north India region about 15th June but this year it is delay of 1 month.

A Research Insight: Prediction of Unfortunate event of New Delhi on 30th May 2014 of Stormy and Dusty windstorm Catastrophe Came True

A Research Insight: Prediction of Unfortunate event of New Delhi on 30th May 2014 of Stormy and Dusty windstorm Catastrophe Came True While Discussing The Mundane Astrological Concepts with Student on 29th May 2014:

It was a Stormy Night in My city on 29th of May 2014 2 @10 Pm when I was
Discussing the Mundane Astrological and astronomical techniques for how
to check Winds and Storms via astrologically and astronomically way and
also predicting the nation’s catastrophe events like Rains,
Earthquakes, Wars, Floods and Cyclones to One of my Student who is
living in New Delhi.

It was a quite interesting discussion on prediction of Natural disasters
via Indian Astrological and Astronomical Techniques which were given in
Brihat Samhita of Varahmhir. I was teaching her how we can Predict
Natural Disaster on our cities, Indian States and Countries and even on
world level too.

A
Research Insight: Prediction of Unfortunate event of New Delhi on 30th
May 2014 of Stormy and Dusty windstorm Catastrophe Came True

Flood Fury and Heavy Rain  in Jammu and Kashmir 2014

Environmentalists say last year’s devastating flash floods in
Uttarakhand, in which at least 5,000 were killed, and the unprecedented
deluge in Jammu and Kashmir this year, both have the same cause –
urbanization, reduced forest cover and erratic monsoon. 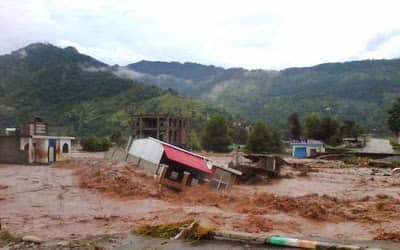 The
meteorological department says it had issued warnings about very heavy
rainfall in Jammu and Kashmir practically every day since September 2.
But while a few families did move to higher regions, the state
government seems to have failed to anticipate the extent of the crisis
and effectively convince those who stayed back. Now point is very simple
within short span of meteorological department predictions within a
days of 2 , nobody can safe guard their family and move into safer
places. The situations in Uttarakhand and Jammu and Kashmir are
uncannily similar, experts say. In both cases the trigger was incessant
rain, set off by the merging of the western disturbance and the monsoon. 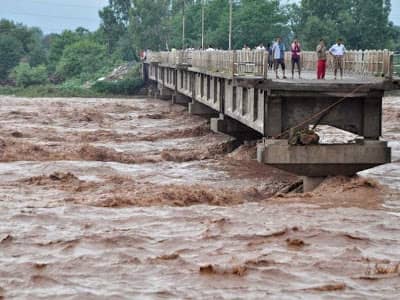 The mega floods responsible for wreaking misery, havoc and devastation
across Whole Jammu and Srinagar and most parts of south-west Kashmir is a
calamity that was waiting to happen and it has same Pattern which we
had seen last year. 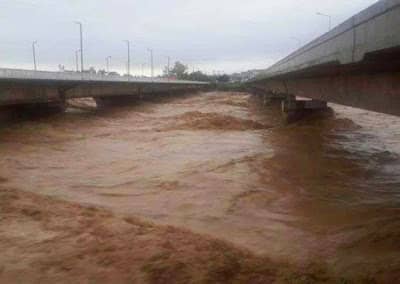 Even i am living in Jammu and Kashmir from
last 30 years, haven’t seen such type of heavy rain and massive level of
most of rivers in valley and in our city too, even my grand-grand
ancestors had never seen such a devastating conditions after 1984, when
flood water entered in most part of the city lie in the western regions
of Jammu near river. 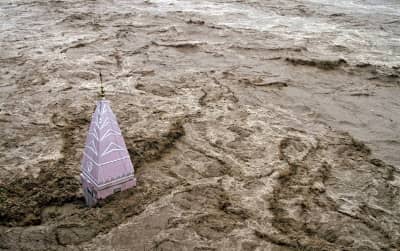 If we see deeply it has some Astrological
and Astronomical pattern which are mentioned in our ancient treaties.
Last year we faced such kind of national disaster in uttrakhand after
June 15 , 2013 to June 17 , 2013, due to conjugation of 4-5 planets in
one of most destructive nakashtra – ardra nakashtra ruled by Lord
Rudra.

Ardara nakashtra falls in India’s North-east region as per
the Koorma chakra methodology presented by Varahmihira in Brihat
Samhita and extracted from rig –Veda where it was already mentioned
kritika nakshtra risen from eastern directions from central India(Varanasi).

Lets have a look at Koorma chakra in India Chart with Uttrakhand chart
and we can clearly see Bharani , Ashwani , Revti and ardara Nakashtras
are Influencing  the North-east region.

With thanks and Regards,
Rocky Jamwal
https://www.facebook.com/Krishnadhaam