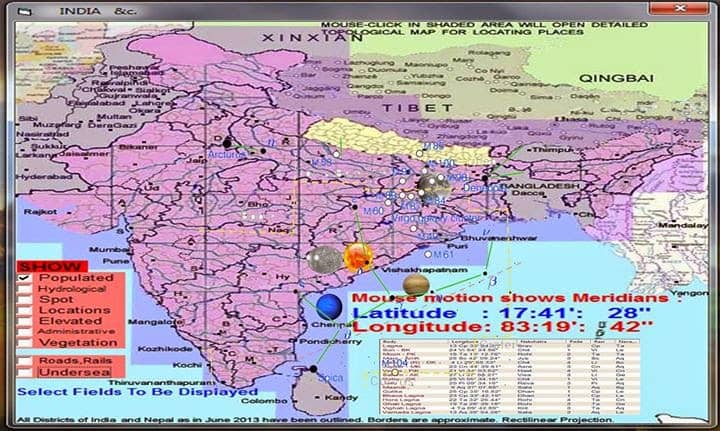 This was Scenario for Andhra-pardesh (Visakhapatnam) area which was exactly happened after blood lunar eclipse on 8th of October 2014  created low pressure area around Indian ocean.
After doing all Calculation we can see  in an Image of Indian map, there were cluster of 4 planets ( Sun(24) , Venus(Hasta -21) , Mercury(4) and Rahu (25 ) in chitra nakshtra in Virgo sign ( near Visakhapatnam). Rahu , Sun and Mercury were closely conjugated in Virgo Sign in chitra , clearly indicated there will be huge Cyclonic storm from Indian ocean and  there can be disaster-tours event   happen in Visakhapatnam or all the areas which are Near coastal around about 83 Longitudinal degree including orissa too.
Sooner when Venus will move forward to Sun in Chitra nakashtra, there will be Heavy rain we can expect may be day after tomorrow, chances are more in 13th and 14th of October when Venus will be ingress in Chitra nakashtra in 23 Degree in Virgo conjugate with Sun and Mercury. 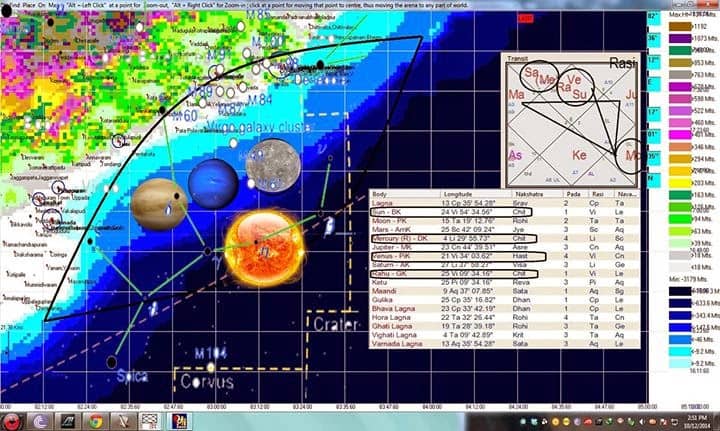 Conjugation of Venus + Sun and Mercury always indicates Rain will Suddenly increase and become dense for continues few days till there will be low pressure created by two hot bodies which is clearly seen over Andhra-pardesh and Orissa coastal areas.
October 12th night will be much devastating for coastal areas of india  as that time  Rahu will Completely dominate coasted areas with high magnetic field by Sun , Moon and Mercury in close conjugation in Chitra nakashtra.

Destruction’s indicated either by Mars and Saturn conjugation or by their aspects , Mars and Saturn 7th ,8th and 10th or Direct aspects are always be a influencing factor for destruction’s , Rahu placements with Malefic planets like Sun , Mars and Saturn or Rahu Direct aspects or Presence of malefic planets in Yama Nakashtras or in Rahu Nakashtras are primary factor for catastrophes . Here Destructive factor is conjugation of 3 Planets in Chitra Nakashtra where Sun and Rahu is closely conjugated , a low Pressure area for the period of time.

Rahu usually gives Devastating Windy or watery Storms i.e Wind Storms, typhoons and cyclones , whenever it combines with Moon(Lord of water) ,Sun(Lord of Heat waves and Flares) and Mercury(Lord of wind) near Coastal areas. After Blood Lunar Eclipse on 8th of October 2014 , With Sun and Moon alignment , created Strong Magnetic and Gravitational Field around Yellow Sea , India Ocean and Pacific Ocean. It was Confirmed it will give Huge cyclonic storm to areas near coastal , Eclipse effected areas , probably day after eclipse on 9th , nearly new Moon (Pratipad) or 5th (Panchami) Moon Phase , 6th Moon Phase and 7th Day Moon Phase of 12th , 13th , 14th of October when Moon Discs will start appearing after the Sun and Moon Alignment near Pacific Ocean . So we can feel its effect till moon 5 phases after eclipse day, after 14th of October it may slow down and move further to central India and will Impact heavy rain till 22nd of October 2014.

In My Post on 8th October  2014 for Blood Lunar Impact analysis, i have explained  what would be the result of 8th october Lunar eclipse on India :

Many people were asking me what would be over all effect for 8th October
full moon lunar eclipse on both individual as well as on Mundane side
on countries ( i,e India or others countries, Indonesia, Australia,
Pacific sea,  USA etc which are effecting by it)

I am taking an example for Indian Map as i am well aware about the
mapping and coordinates in India  Physical maps as per Koorma Chakra. In
India Map, you can easily see, in most of southern region area sun will
be there tomorrow with North Node Rahu and Com-busted venus, in Virgo
rashi ,Chitra nakashtra is there, mostly influence is going to effect by
this Lunar eclipse on 8th of October 2014 and its direct aspect area of
Pisces (Revti nakashtra area) Visakhapatnam  Andhra-pardesh, Cuttuck,
Oddisa, Kolkota and north east areas etc.

So, i am presenting pictorial explanation how it gone effect our self specially for people of India.

The 2014 eclipses are happening in pairs – on the new Moon and the full Moon in April and October.

The October 8, 2014 total lunar eclipse is the first of the pair. This
total eclipse is visible in Asia, Australia, the Pacific, North America,
and South America. In Vedic astrology or Jyotish, the lunar eclipse is
happening in Pisces.

On 8th of October 2014, The full Moon and south node Ketu will be in Pisces in the nakshatra or constellation of Revati.

The Sun will be with a debilitated and com-bust Venus, and north node
Rahu in Virgo. The deity of Revati is Pushan, the nurturer. He is
responsible for safe travels across large bodies of water.

People with a Pisces rising or with Moon or a node in Uttara Bhadrapada
or Revati nakshtaras may most feel the impact of the October 8, 2014
lunar eclipse.

According to NASA, for San Francisco, CA, the October 8, 2014 lunar
eclipse will take place from 12:16 AM to 5:34 AM local Pacific time.
Typically,Vedic astrology advises that eclipses are time for inwardly
directly activity and not for gazing at the Sun or Moon. It is also best
if you stay inside and keep your blinds closed and not expose yourself
or any food to the Moon’s rays. New undertakings should not happen
typically three days before or after an eclipse or when the Moon is in
Revati for 6 months.

In India it will effect Kerala and southern region most lying to chitra
nakashtra (near Virgo Sign – Ruling Kerala , Hyderabad and
Andhra-pardesh areas mostly) Oddisa , Cuttuck , kolkatta , viskhapatnam ,
andra pardesh and and in South node(Ketu) area it is effecting nepal,
Tibbat ,Varanasi , Culcutta , north east areas and Northern region of
New Delhi and Jammu and Kashmir which are close to Revti nakashtra and
Pisces sign as per the Koorma Chakra presented by Varahmihira in Brihat
Samhita.

In Mapping of India Map  with ” Koorma Chakra “,  based on Ancient
technique as suggested by Varahmihira in Brihat Samhita, it is easily
seen in map what are the areas of effects by ongoing Eclipse on 8th of
October 2014.

During this eclipse Body parts which are effecting are feets , lower
limbs and hip area as per the kaal purusha sign assignment on body
parts.

Take an example of Pisces lagna where Eclipse influence will be mostly
seen and Effect on Birth chart will be clearly seen in 5th, 1st , 12th
and 7th houses & lords which are involved in it, which means ; might
be a case of Bad Repo for Pisces lagna , sudden fear , hasty decisions ,
lots of tensions and frustrations , will be in trauma or shock like
situation , mind will be in confused state what to do next , Martial
issues will be there being involvement of 8th Lord Venus with 12th lord
Rahu and 6th lord Sun – Might be case of Separation with loved ones in
7th house i.e an extramarital issues can be seen (being 12th lord in 7th
house – North node Rahu ) who are gone running Moon Ad , Sun Ad or Rahu
AD or the nakashtra dashas which are ruling by lunar eclipse will
mostly felt.

With thanks and Regards,
Rocky Jamwal
https://www.facebook.com/Krishnadhaam