SALYAS OR BURIED SKELETONS IN VASTU 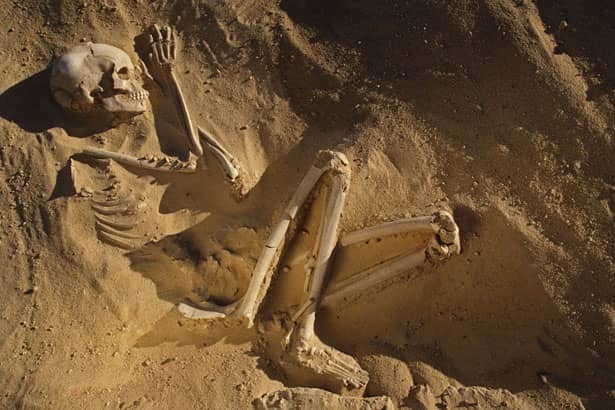 What are Salyas: The word Salya comes from Sanskrit language and it means anything tormenting or causing pain. It also means bones.
Reasons behind effects of Salyas: Why, which is something that is buried underground is going to create a problem for the person who is going to live on that land.
Anything, which decomposes, below the ground causes the release of several poisonous gases and an active growth of parasites on its carcass. This in-turn causes problems for the inhabitants of the place in the form of diseases, mental afflictions etc.
However, apart from the above scientific dictum, there is a spiritual reason for the same as well. The dead or decomposed remains are not considered good because it is against the basic tenets of spiritual order. Anything filthy, dirty, or bad is avoided in spiritual matters. If we want to invite positivity in the abode, then the first thing is to remove all the negative elements from the land or site. This is the reason why removal of salyas is very important. It is like cleaning your house.
Moreover, nobody likes a dead body buried underground at the very place where they are living.

HOW TO FIND OUT SALYAS

THE KNOWLEDGE OF ASTROLOGY/SPIRITUAL POWER:

I have emphasized in many of my articles, that the knowledge of vastu is incomplete and unfruitful if one is not aware of the astrological calculations. Salyas require a complete knowledge of astrology and especially the esoteric and highly spiritual system of Prasna. (I am not referring to Tajik, which is not Vedic). Whenever, we say Prashna it means the highly spiritual Kerala Prashna system and not the other methods.
While Vastu in itself is a highly scientific branch, it is baseless to think that it is not related to Jyotisa. Contrary to the popular theory, one cannot learn actual vastu if he/she misses the learning of jyotisa.
Ayaprakaran, salyaprakarana, vargavarna, Ksetravarana, Gramarvaran, dikprakaran etc are difficult to comprehend without an active and advanced knowledge of jyotisa. The astayonis are related to astavargas which are a part of advance jyotisa. It will be very foolish to assume that vastu has nothing to do with Jyotisa.
Therefore, any person who claims to be a vastushastri and is devoid of an advance knowledge of jyotisa is actually befooling people.
Considering salya, one needs a knowledge of Salya mantra sastra for observing the problems at a site or he/she should be an expert of prashnam.
Based on Dootlakshanam, Omens and prashnam a skilled Prashna shastri can easily decipher the Salyas at a place.

1. Sthira rashi in Uday indicates chance of finding bones at a site.

2. Char and Dual signs indicates doubts in finding bones at a site.

3. Chaturuthshuddi is important in Prasna chart for the examination of Salyas.


4. Malefics in Quadrants indicate presence of Gods, yakshas (Demi-Gods), Nagas and Pisacas (Ghosts) at a site. Depending on the type of Gruhas and nakshatra involved.

5. In Navgruha chakra, three things are been asked from the querist. On the basis of these three answers Salyas are determined for a place.

6. Vastu Raj vallabha gives us Grahvaran chakra. Based on this we can determine the Salyas. For example “A” varga and query word in relation indicate a human dead body below the ground.

8. Karikas use incidents for determining Salyas. For example, if the owner of a house is suffering from a chronic disorder then Salyas are present in a certain direction in the house.

10. Jyotisahimtarnava mentions the use of asta akshar chakra for Salyas.

While determining the Salyas is a tedious task in itself and requires a thorough knowledge of Prasna the salyodhara requires a proper method for removal of Salyas.

Shodouphar poojan, navgruha invocation and Bali karma (Vaisnav Bali) is done for the removal of evil effects of Salyas.