Wheel of Time in Vedic Cosmology

In Vedic mythology, a fabled dawn time existed in the distant past, when human beings had direct contact with the divine intelligence emanating from Brahma—the seat of creative power and intelligence in the cosmos. This archaic Golden Age (the Satya Yuga) lasted some 4800 years. After the Golden Age ended, humanity entered a denser era, that of the Silver Age, lasting only 3600 years. In this age, humanity’s connection with the source was dimmed, and sacrifices and spiritual practices became necessary to preserve it. The Bronze Age followed, and humanity forgot its divine nature. Empty dogmas arose, along with indulgence in materialism. Next we entered the Kali Yuga—in which we remain today—where the human spirit suffers under gross materialism, ignorance, warfare, stupidity, arrogance, and everything contrary to our divine spiritual potential.

As the teachings tell, Kali, the creator-destroyer Goddess, will appear at the end of Kali Yuga to sweep away the wasted detritus of a spirit-dead humanity, making way for a new cycle of light and peace. Notice that the Manu text takes us from a pinnacle of light to the ultimate end-point of the process—the darkness of Kali Yuga. And notice that the four ages, when the overlap period is added, amounts to only half of the 24,000-year period of the Vedic Yuga cycle.

Calculation of Time as Per Surya Siddhanta

The angle Between the planes of Ecliptic and Equator is inclined at 23 ‘
28 to the celestial equator and it is the annual path of the Sun
around earth as seen apparently and above it there is belt of zodiac
about 9 degree north and 9 degree South of the ecliptic where the moon
and other planets have their motion.On 21st of March Sun is at Zero
which is also the first point of Moveable Sun.when the Sun Starts moving
Northward from Winter Solstice on 21st of December Sun is considered
as Uttrayan and it remains in Uttrayan up-to 21st of June and Moves to
dakshinayan from 21st June to 21st December. 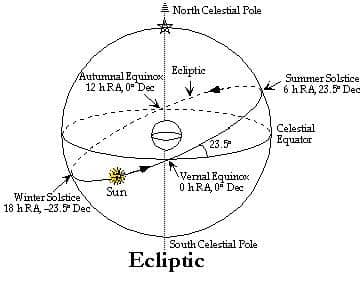 When it is moving form
North to South it is called Entering Libra when Sun is on Autumnal
Equinox on 23rd September. Sidereal Location of Stars is fixed from Zero
Degree of Fixed aries in Ashwani Nakashtra with the reference point at
the end of Revti Nakashtra. The anagular Distance between first point of
the fixed Aries and of the Movable aries is called Ayanmasa.In Chitra
Pakasha System Zero point of Aries is 180 degree opp to Chitra
Nakashtra.