Science of Vedas and Mundane Astrological Principals: Understanding Mechanism of Clouds formations, thundering and Electrostatic charge production based on the Principals of Vedas and Vedic Metrology science 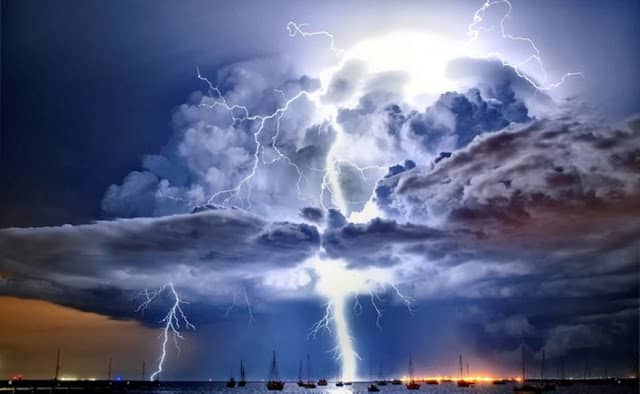 When you are studying hyper sensitive Phenomena’s of Nature and its impacts on earth environment wrt to Mundane Astrological principals, we must be keen observer in sky as well in space. Nature is something that works on vibrant mechanism. Although there is none other way to understand how nature rather than keep watching and observing its core structure via modern technologies and instruments. Nature is actually works on the principals of Vibrations, frequencies and energies formations. Electric charge is always present in nature but in neutral state rest of the positive and negative charges at sudden can outburst any time.
If we simply try to understand what actually nature is for that purpose we need to dig deep think from both prospective i.e Spiritual as well as physical.

lets move forward and try to look into deeper prospects via modern science terminologies :  according to wiki  “Nature, in the broadest sense, is the natural, physical, or material world or universe. “Nature” can refer to the phenomena of the physical world, and also to life in general.The word nature is derived from the Latin word natura, or “essential qualities, innate disposition”, and in ancient times, literally meant “birth”.Natura is a Latin translation of the Greek word physics (φύσις), which originally related to the intrinsic characteristics that plants, animals, and other features of the world develop of their own accord. The concept of nature as a whole, the physical universe, is one of several expansions of the original notion; it began with certain core applications of the word φύσις by pre-Socratic philosophers, and has steadily gained currency ever since. This usage continued during the advent of modern scientific method in the last several centuries.”

(Reference : Wiki , Nature)
What i believe is everything that includes or works in a perfect harmony to each other without distributing life cycle and elemental balance  of the living being and non living being is called Nature.
Everything is considered in Nature from trees, plants, Living beings, Humans, Micro-organisms, Star, Planets, Sky, Weather and the 5 Panch tatvas and the science which deals it with is called Medini or Samhita used for studying factors of nature occurring in earth and in space.

” According to one indigenous theory established in the Upanishads, the universe consists of five basic elements³viz.,1. earth or land, 2. water, 3. light or lustre, 4. air, and 5. ether. The nature has maintained a status of balance between and among these constituents or elements and living creatures. A disturbance in percentage of any constituent of the environment beyond certain limits
disturbs the natural balance and any change in the natural balance causes lots of problems to the living creatures in the universe. Different constituents of the environment exist with set relationships with one another. The relation of human being with environment is very natural as he cannot live without it. From the very beginning of creation he wants to know about it for self protection and benefit.”

(Reference : Orign of Environmental Science from Vedas by Sashi  Tiwari)

According to Vedic Principals, world consists of Agni i.e., fire or heat and Soma (Varun) i.e. water, 12 forms of Sun (Surya – aditya ) and is the soul of all for those are being and for those who aren’t living being. Nature controls by Indra who is most powerful god and who kills Vritra, the symbol of cloud to free waters. Vritra means one who covers and is derived from the root vri, to cover.  According to R.R.M. Roy the main force of expansion in the Vedic cosmology is Indra, and his chief adversary, the main force of contraction, is Vritra and Maruts are Indra’s associates. Vedic seers pray boldly to these natural forces and aspects for bestowing plenty and prosperity on them. devi Aditi is praised as Devamata – the mother of all natural energies and she symbolizes the Nature and forms of water is considered as essential to all forms of life.

According to Rig-veda the water (‘APAH’ ) as a part of human environment occurs in five forms:

All the 5 elements are merged in Prakrti. According to the Bhagavad Gita, the basic nature of intelligence by which the Universe exists and functions is called prakrti. It is described in Bhagavad Gita as the “primal motive force”. It is the essential consituent of the universe and is at the basis of all the activity of the creation. In sankhya philosophyprakrti is comprised of eight elements: earth, water, fire, air, space, mind, intellect and ego. It is characterized by the three gunas: sattva, rajas and tamas. prakṛti is female while purusa is male. 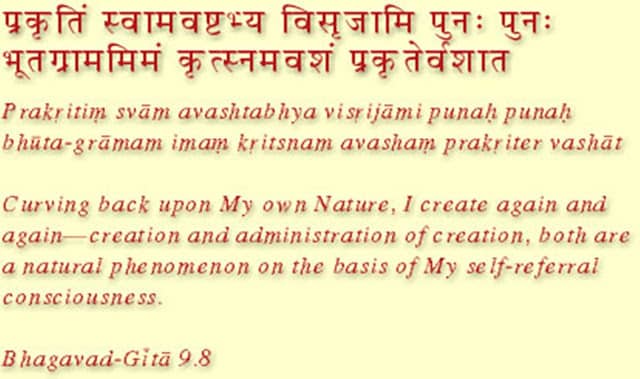 According to the ancient Vedic science of ayurveda the three gunas — sattva, rajas and tamas — as the pertain to the human physiology are called doshas: kapha, pitta, vata. The balance or imbalance of these doshas defines the prakriti or nature of one’s body.

This way we can understand how vedas has presented Prakarti in scriptual form and how 5 elemental properieties are binds with nature.
For understanding nature and its impacts wrt earth one must be expert in observing Astronomical principals occurring or triggering in above our sky just to see how these alignments and relations have Direct/Indirect relations with the earth. for e.g Many people says Planetary movements have no impact on Mundane events occurring on earth- My Question to them, if it is the reality and the only reason than why during the eclipses we see high tides, Heavy Rainfall soon after Eclipses within a day or in week, why we observe Sudden weather changes in atmospheres, why Sand storms hits, why Rain storms occurs, why cyclones near coastal areas triggers during eclipses and many a time why we observe certain seismic activities soon after eclipses. Why most of the mudane events occurs after retrogression phases of slow moving planets. why fiery and watery trine conjunctions produces Cyclonic or Supernova like explosions in both ground and in space.
My question is much simple why everything after Astronomical events why not in between or before these astronomical events ?

Let me give you a simple Example how vedic seers observed Factors for Electric charge production in the Clouds during vedic periods:
Now question is What actually is natural electric charge ? In simpler language Mechanism by which the Apah (Moisture based water i.e form of water in air (Vayu)) undergo in the clouds produces Vidyut (electric charge) and according to modern Meteorologist during occurrence of very violent motions within a large cloud produces Electrical charge. When two substances are in violent motion with respect to each other, the parts are often found to be electrically charged, thus reason for producing lighting and heavy rain.
According to Vedic Meteorologists all sorts of clouds have no tendencies to produces electrical charges only the clouds formed via vapours evaporated by the radiation heating from the sun become electrically charged.Reason waters on being evaporized by radiation heating from the sun get electrically charged that’s why we called Apah.
Further far better explanation has Been clearly mentioned in Atharveda :
” Because you are sent forth (Evaporized) by the Varuna (Radiation heating from the sun) and you have condensed so well. Indra ( Electrical Charge) possess you, you are, there fore called Apah ( Charged clouds) “.

When these Apah set to move violently are called Pravatas (floating clouds). Since the electrical charge is produced in the floating clouds ( Pravatas), vedic seers named as “Pravatonapat”.
In Rig Veda further references are mentioned as:

” O the Daughter of floating clouds, the electrical charge ! let me salute you and your forms – Hetu/Agneya or Negative charge as well as Vapu/Somiya or positive Charge. We know your residence which are Apah. Hiding therein. You act as Nucleus for gathering clouds “
From all these explanation it is easy to conclude why Vedic Seers Called the electrical charge produced in the clouds formed from vapours evaporated by radiation heating from the sun as Indra. Reason is, Here Indra is acting as representative from the sun to act as charge producing agent in moving clouds to produce heavy rains. This is the only reason why lord Indra called as Rain God since from vedic era and in modern language it is the most important physical force required for the heavy rain for producing thundering at same time because of its charging ability and sometime it is act as main factor for triggering heavy earthquakes when eclipses triggers in Indra and Varuna Mandala Nakashtras.
I Hope this will helps to understand why Seers were pure in sync with nature for understanding deeper meaning of nature occurring in space and sky as well.
Reference, Sources and links
Vedic Meterology By Ravi Prakash Arya
Origni of Envrionmental Science from Vedas by Sashi  Tiwari
Astro Meteorology Atharveda clouds formations lightning medini jyotish Mundane astrology rainfall Rigveda thundering Vedic meteorology
Share article:
682 Views
Career in Astrology: how to indentify your career in vedic astrology, Profession type, work profile and choice of ideal Profession
Moral ethics of Astrologer: Who is true Jyotish ? Qualities, Moral ethics and Spiritual nature of astrologer, Long pending query keep enquiring my state of mind and an observation since i have started my journey in Jamini and Rest of other Jyotish systems 15 years back.