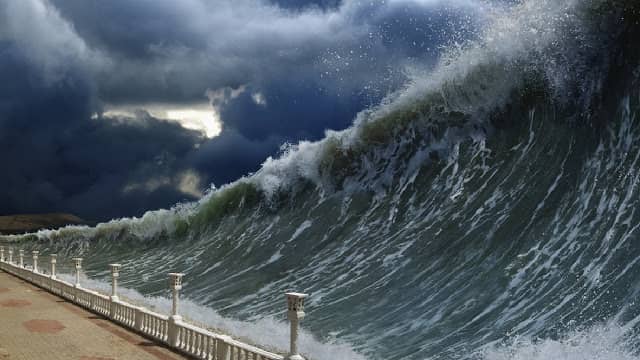 Unseen world is composed of 90 % Prakarti 3 forms of energies; Satva energy (Energy in Rest, Praana Energy or Sookshma Energy, cause for promoting Satva guna in nature, energy of beginning) , Rajas (Energy in Motion – Kinetic Energy, cause for material manifestation) and Tamas (Energy in Mass or inertia, cause for Matter, Material creation and destruction ) and Seen world is made up of 10% Mass or Matter and it is made out of Maya (Dark Matter in Science and Divine energy in Upnishads responsible for creation and manifestation of cosmos). What we are seeing is only 10% rest of 90 % is Hidden and cant be seen via naked eyes and neither science will able to prove it.

Sookashma(Sub Atomic level) is what we cant experience by physical knowledge or physical body it need Sookshma Vision and higher soul level Energy to understand it.In modern Science language 90% of world is in living in Sub-Sub atomic level(in Quantum World) and it is beyond for current Humans beings DNA level to understand it fully in simpler form. The DNA level of Seers and people who were living in Doophar, treta and Sat yuga were composed of Highly Precious and Extreme helix Structure.They were highly intelligent being and biological structures are beyond our imagination, living in multidimensional yuga with abilities to use sookshama energies at maximum either for traveling or for any material manifestation.

In Spiritual terms we called it they were living in Sookshma energies form or in Quantum world structure or having solid understanding of Praana Energy form (Purest energy form) or absolute form (The god Component), to convert it into any mass or matter or to flexible their body according to environment. Means they have the vision or composed of highly superior subconscious to understand it or see it without physical eyes. They were having solid understanding of Prakarti Gunas, How Prakriti itself created all the matter or how it his holding individually and who is behind it- The Supreme reality. Without Prakarti tri Gunas Nothing could be manifest in any form.Stars, Planets, Space, Nature, Rivers, animals and Humans etc all are Manifested form of Prakarti, means made out of another form – ” The Maya – indicative of Physical existence of all ” , when Prakarti originated out of Purusha at the beginning. Whole universe is made out of vibration of  two Energies – The Shiva(+) &  The Shakti (-), the true absolute form of creative energies responsible for vibration and dynamism in  the universe.What we are seeing via naked eyes or what we are sensing or observing is manifested form of  ” The Maya – Sub part of Tamas energy in Mass”. In scientific terms we can translate as Matter made out of huge explosion in the beginning after darkness which means before nothing there was everything present too. In Language of spirituality it is Maya – Present in physical form and what is hidden is Sookshma (The Absolute energy or Brahman Tatva or simply the Vibrating energies in science, always there but not in visible form) that is what these days sciences is referring as how everything came into existence and how everything is bound in this universe out of unseen energies – That what is  the ultimate theory of everything – The String theory.

Satyug was composed of 100% Satvic Energy and Satvic knowledge when people were almost in zero point gravity or you can say were mostly in Saadhna or in transcendental form, because of this they were living up-to lakhs of years or can survive even without any food or any physical requirements, all because of purest form of energy channelization. Treta Yuga was composed of 100% Rajasic Energy where people were mostly in Pleasure, enjoyment and in good living where most of their energies are spent in creation, building physical forms means energies were in kinetic form in creating something, without vibrating energies nothing could be create in any Physical form(Mass), that’s the reason Knowledge was in Rajasic form.

Doophar Yuga was Composed of 50% Rajas and Satva Both and at the end of Doophar Tamas Gun was superimposed it when We met Mahabharta around 3000 BC which was the beginning of the Kaliyuga period when people were mostly near destruction or misusing the knowledge, Rajas ultimately at end gives zero satisfaction because it bound soul in cycles in death and Birth. Kaliyuga was Composed of equal amount of Satva, Rajas and Tamas Guna that’s why Kaliyuga is most longest yuga from all and we have seen many frequent changes within short span of periods, In Kaliyuga people will Suppress Rajas and Satva energy and promote Tamas guna means everything who is in Mass form or physical form will be act as proof of living or proof for science, all material knowledge will in in boom, Jyotish will be one of important knowledge in realizing Spirituality in kaliyug but nature will be very vibrant in Kaliyuga because of increasing Tamas Energy.

The guna we promote Prakarti will behave according to it and will take its shape in Kaliyuga. Prakarti works according to Newton 3rd Law; equal and opp reaction formula, what you do same will get in that form but result will be depend on action chosen.If there is Adharma or Mass killing involve in action chosen or idea behind it, prakarti will be in fierce form and will be responsive with same amount of tamas energy; whose only initiation is to destruct , e,g Mass death in Uttrakhand – Adharma, Increases in tamas and Rajas energy around temples and Sexual activities around temple was the reason and there are many more hidden reason only who suffered there can better tell, Mass death in Nepal earthquake – animal slaughterings was the main reason behind equilibrium imbalance in Nepal, scientifically there was major shift in Himalaya’s Tectonic plates, ultimately is the seed of Lord Shiva and there might be other reasons too but uniqueness is more the Tamas energy Humans send or radiate from any place, nature will show its fury in its form and In Kashmir from 1990 – Humans slaughtering via Terrorist activities was actual initiation of Tamas energy, animals killings in mass and adhamara in the land of Seers was the main reason why Kashmir is again and again facing natural catastrophes and there will be many more to experience in future.If slightly try to analyze most of the areas drown via floods were the Lands of Lord Shiva (3rd energy(Tamas) for destruction’s). This is the reason why in Kaliyug, Knowledge ultimate motive is to make either Rajas based Equipments or to make those equipments whose ultimate destiny will lead to destruction’s or either it took shape into destruction’s knowingly or unknowingly.

Manhattan Project suggested by Albert Einstein to work on Nuclear bomb against Germany was an example to learn from it how nature acted and reacted on idea itself for mankind destruction.Nuclear explosion on Japan was an example how knowledge took its form in Tamas form ultimately we have seen many changes after that, mass killings and massive changes in environment. This is the reason why these days we are seeing increase in numbers and volumes of mass deaths via Natural catastrophes like Earthquakes, Rains, Floods etc because Prkarti Acting and Reacting based on Humans Gunas. More the Tamas guna promote in humans more natural catastrophes will come soon, Prakarti is Relatively working on humans actions and reactions theories, in Modern science it is called Time Ripples – What you choose , time will shift in that direction that’s why time is working based on multidimensional world and Future world is completely based on Current Karmas, actions and consequences, Bad karmas will create bad consequences and ultimately lead to destruction’s in future, simply Mankind will decay in its process.

Humans actions are leading consequences and creating polar shifts in earth field and till 2030 earth with new cycle of sun of 11 years earth will be in new dimension and in new polar shift with slighter drift in equators points – either there will be too much heat or there will be too much cold.Results are known to everyone and are visible to understand it. Now you can estimate why in this monsoon season why we have seen increase in number of Cloud bursting in India and seen Destructive shape of rainfall in almost every part of India. If we Suppress Rajas and Satva , Tamas will increase and Same tamas will lead to natural catastrophes and sameway tamas knowledge will increase too which ultimately take mankind into darkness at the end that’s why Murphy Law Suggests, everything decays in its process in nature with increase in time. So watch your actions and Karmas as time is proceeding, Prakarti exactly behave accordingly as replica to your Actions.What you send you will get same with at same amount , that what is law of energy.