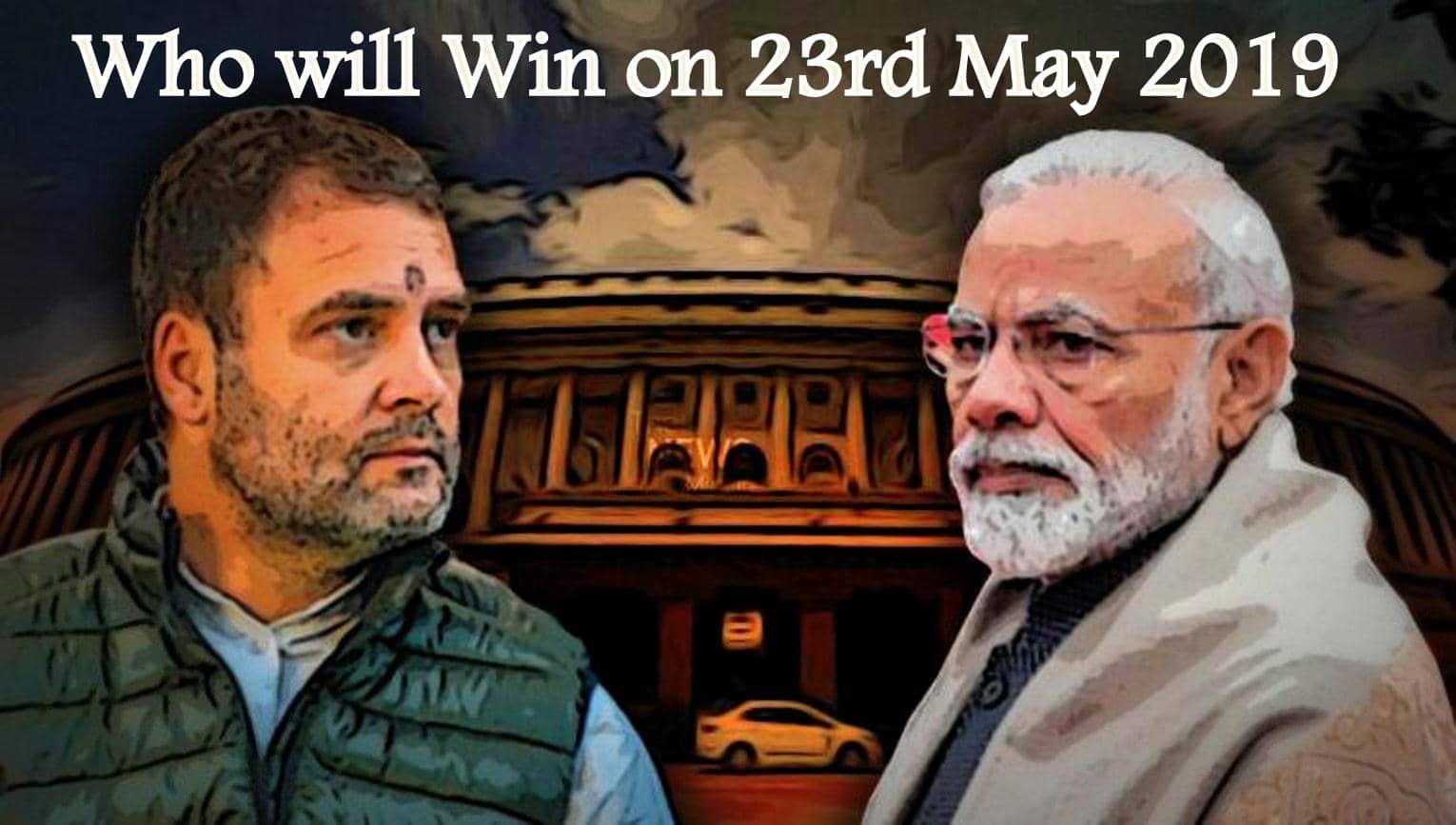 Written and Analysed by Utap Pathak

Secondary assessment based on Election Schedule

Note: This is the final analysis based on the Election schedule announced by ECI. The main article can be seen here in this link > https://drive.google.com/file/d/1CpNkXJPUghY3d3LcZ57fRA__8d4HOP1C/view

1] This short article is the final assessment based on the announced dates. Most importantly the start date i.e. 11th April 2019 and the result date i.e. 23rd May 2019.

Let’s observe the Grahas in the above chart (date 23.5.2019) w.r.t Bharat’s Vrishabh Lagna and below pointers reproduced from the Main article. 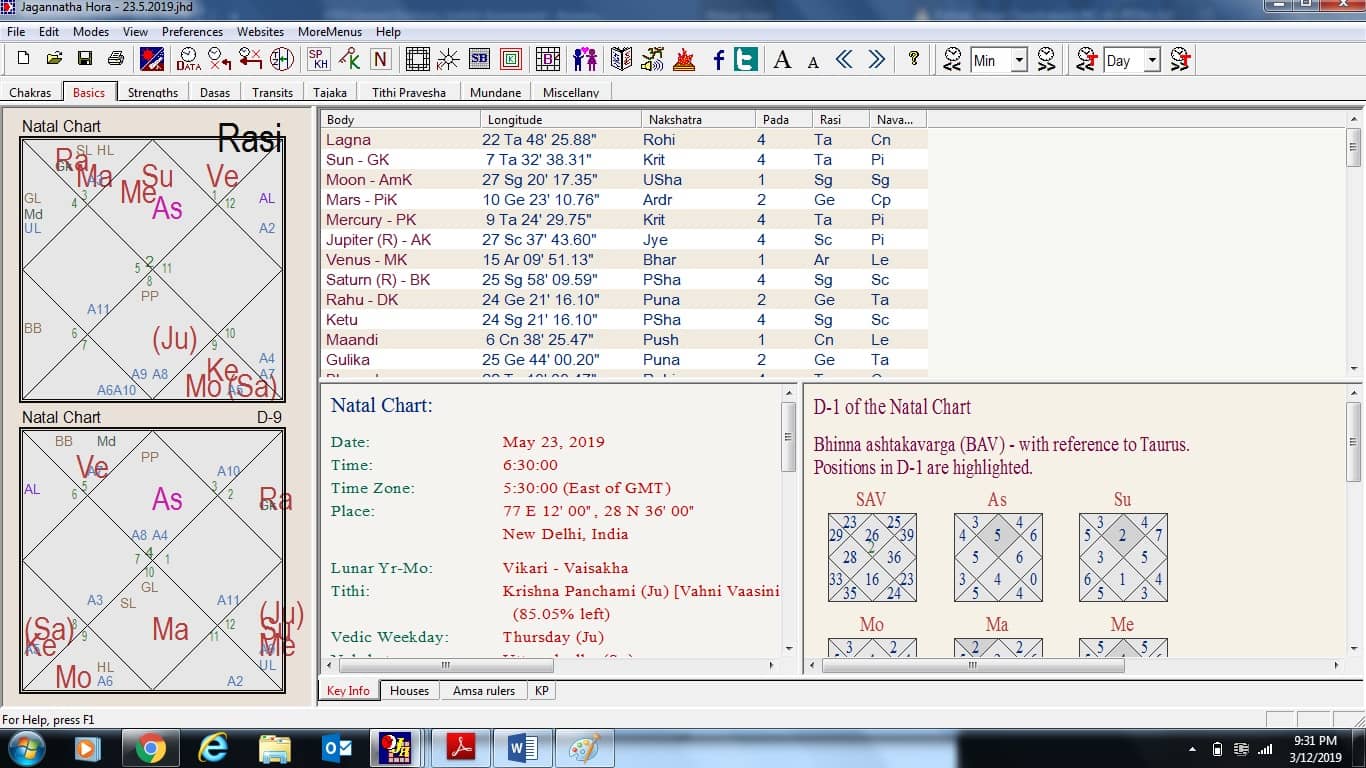 2) If the above condition is happening AND Shani and Rahu (10th lords) in transit are strong & positively placed, then it indicates powerful (full majority) government coming at the Center.

3) If Transit Guru does not aspect 10th Bhava and he is not exalted, the incumbent Government retains the power. Here again, how strong this government possibly could be well indicated by situation of Rahu and Shani (as indicated in point no.2 above).

4) Weak Shani and Rahu in transit shows weak government at Center. It also shows sinister, corrupt, incapable, appeasing & highly communal government. Detrimental to the interest of Bharat and her people.

5) Strong Lagna Lord venus in transit (in Lagna, 4th, 9th or 10th or 11th) along with strong Rahu and Shani are likely to provide strong and stable government.

* Guru on 23.5.2019 chart neither aspects 10th Bhava nor aspects Shani & Rahu (10th Lords). Guru is also not in exaltation Rashi. Thus, it does not fulfil the conditions for the “Fall of the ruling Government” as mentioned in the point no.1 above.

* Rahu as the 10th lord is exalted in the 2nd Bhava generating the powerful Simhasan Yog. The other 10th co-lord Shani (Retrograde) is placed in the 8th Bhava in very close conjunction of Ketu. Shani aspects 10th Bhava with his 3rd aspect. Exalted Rahu also aspect 10th Bhava with his 9th drashti. Thus both the 10th lords (Rahu and Shani) aspect their own Bhava as well as mutually aspect between the two. Shani being retrograde can also provide result of being in 7th Bhava where he gets directional strength. Ketu and Mars are Marakas. However, Mars and Ketu provides a lot of fire power to Rahu and Shani. Shani provides results of being in 8th as well as 7th (partially due to Retrograde motion).

Thus, all of this assessment shows that Shani and Rahu are strong in Transit w.r.t Bharat’s chart.

*Moon is going to be Vargottam (in same Rashi in Main chart and Navamansh chart) throughout the day on 23rd May 2019. From 5:15 am to 11:42 am in Dhanu Vargottam and then until 18:15 in Makar Vargottama!. Moon is the 10th lord of NaMo’s chart and his vargottama strength on that day shows fortified 10th lord in transit.

Assessment of all the transit Grahas mentioned above paints a picture which says that the result will come strongly in the favor of Ruling Government!

2] I wish to point out a unique observation on Narendra Modi (NaMo)’s chart w.r.t. Guru and Rahu’s transit cycle.
When NaMo took the oath as CM of Gujarat for the 1st time on 7th October 2001, Guru and Rahu were jointly passing through Mithun Rashi which is the 9th (Bhagya) Bhava of NaMo’s Tula Lagna chart. 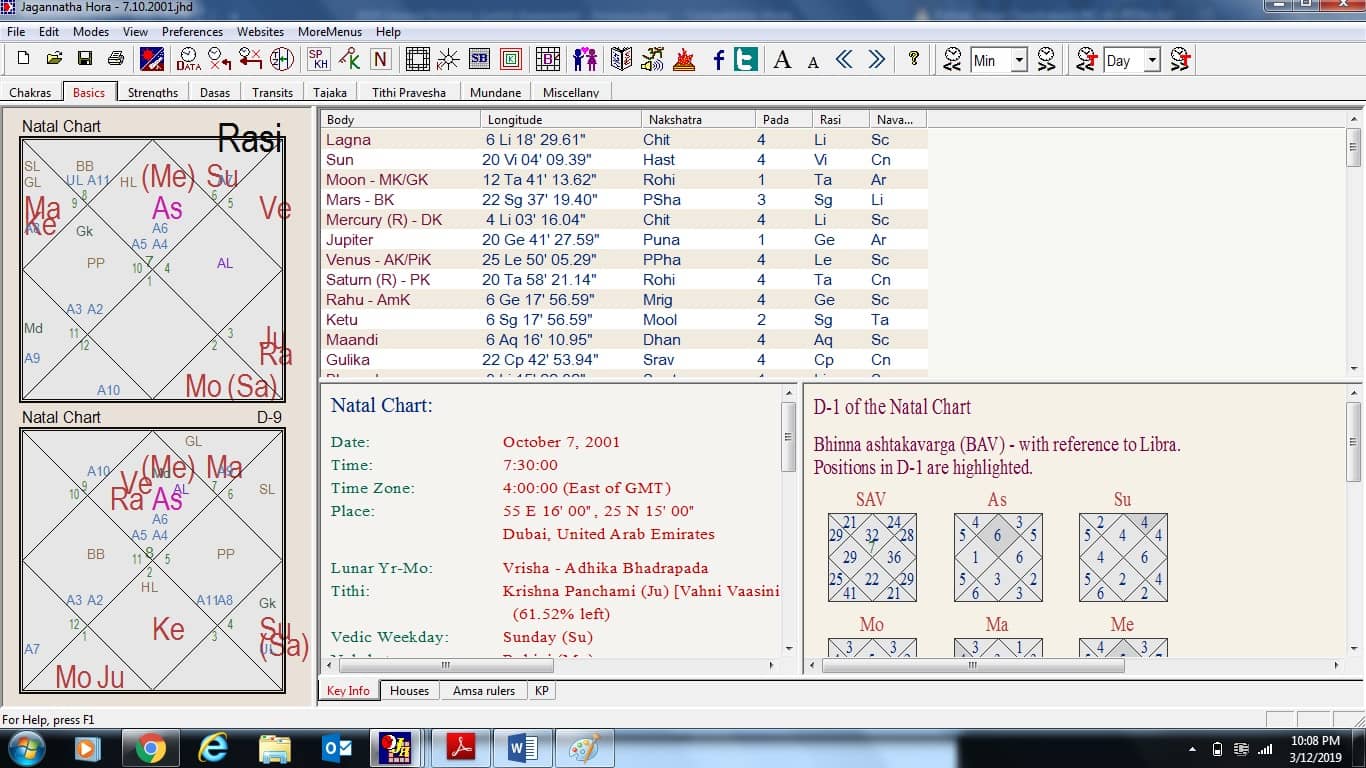 When Guru competed for one cycle and came back to Mithun (in 2014), NaMo became PM for the 1st time. Now in 2019, when General Election results are going to be declared, Rahu is completing his cycle and coming back to Mithun Rashi. These three events are amazingly co-related.

What Results now Rahu should give to NaMo when he is completing one round since 2001 and coming back to Mithun?
Unrestricted

1st let’s check the above chart of 7.10.2001 (in relation to NaMo’s Tula Lagna). Rahu is the 5th co-lord and close friend of LL Venus. Rahu gets exalted in Mithun Rashi. Thus Rahu, as the 5th co-lord exalted in 9th Bhava generates powerful Rajayoga and triggers the “Bhagyodaya”!

Now, check the 1st chart given (of 23.5.2019) w.r.t. Tula Lagna (of NaMo). Rahu’s Rajayoga mentioned above is again repeating. Not only that, but Rahu is also in Mutual aspect with another PYK Shani. Shani in the 3rd Bhava with Ketu is extremely powerfully placed (Natural Paap Grahas in Upachaya gives great results).

Mars & Rahu’s angarak yog happening in Mithun on the result day has a special significance. There is a dictum in classics. Rahu in Kendra with Trikona Lord or Rahu in Trikona with Kendra lord generates a powerful Rajayoga.

Here, Rahu is placed in Trikona (9th Bhava) with Mars who is a Kendra Lord (7th Bhava). Thus Rahu+Mars combination in Mithun is generating powerful Rajyoga in Transit w.r.t. Tula Lagna of NaMo.

Venus on that day is in Mesha and directly aspects own Bhava from 7th and this fortifies Lagna Bhava.

RAHU, MARS, SHANI AND KETU all powerful Natural malefics are directly influencing 3rd Bhava of NaMo’s chart which is providing him with unprecedented energy, bold actions and parakram (valor). NaMo is going to be in extraordinary action even by his own standards in these 2 months.

3] A small observation: In 2014, when Elections started (on 7th April 2014), Moon was in Mithun Rashi along with Guru. This time around on 11th April 2019, Moon is again in Mithun along with exalted Rahu.

Not to forget that Moon is the 10th Lord in NaMo’s chart and also the current Dasha lord. Thus, the 10th Lord of Karma is placed in Bhagya bhava at the start of the Elections indicates Auspicious results!

On the result day, Moon comes to Makar Rashi around 11:40 am. Moon will aspect own 10th Bhava for NaMO.
W.r.t. Bharat’s Vrishabh Lagn chart, Moon in Makara will be the 9th Bhava.

9th co-lord Rahu will be exalted in Lagna with 6th/11th Lord Mars. Another co-lord of 9th i.e. Shani
Would be placed in 7th in Digbala and aspect Lagna. Shani will be with 6th lord Ketu. 10th lord Guru will be in 6th and aspect 10th bhava. LL Mercury will be 12th with Sun. Yogakaraka Venus will be in 11th bhava. Moon will be in 7th until 11:40 am and then move to 8th Bhava.

*Shani-Ketu degree-wise close conjunction in Scorpio (7th Bhava of modern Bharat’s chart) happened during 1984 Elections. Absolute sympathy wave due to the assassination of Indira Gandhi got 414 seats to Congress (I) which is still a record.
*Shani-Ketu conjunction (degree wise quite apart) happened again in Meena Rashi (11th Bhava) during 1996 Elections. No party could get a majority. Atal Bihari Vajpayee became PM of a weak government which fell in mere 13 days and political instability set in.

*We have to now see what Shani-Ketu degree-wise close conjunction, happening in Dhanu, has in store for our beloved Bharat Mata and to all of us! To me, looking in isolation, retrograde nature of Shani would provide effects as if Shani is in Scorpio. This coupled with the comprehensive assessment made in these two elaborated articles, I am confident of the windfall for one party which is headed by the current Prime Minister Narendra Modi.

Conclusion: Judging all the four – 1], 2], 3] & 4] – points given in this article, I have come to the conclusion that the results on 23rd May 2019 are going to be strongly in favor of NaMo. I have to say that in this elections, NaMo’s chart is going to be much heavier in its influence than the BJP’s chart.

NaMo is quite likely going to surpass the success of May 2014 and even cross 300 Mark comfortably on his own. Let’s see, if He can surpass Indira Gandhi’s electoral success of Jan 1980. Narendra Damodardas Modi is the chosen instrument of Jagadamba. His 2nd term as PM will completely realize this statement. May he completely realize his burning desire to take our great Bharat Varsh to the glory before he winds his mortal coil.

A Nadi Research to predict the year of BRAHMOPADESHAM (Upanayana), Guru Deeksha
A new dimension in predicting marriage through nadi Astrology