A new dimension in predicting marriage through nadi Astrology

After prostrating to my Nadi Guru Shri R.G.Rao, Acharya Madhva, my Kula Devatha and my Ishta Devatha,I am going to delineate a new method of predicting marriage as per Nadi Astrology.

We all know that marriages are made in heaven but some marriages are auspicious or happy marriages and some have difficult marriage life. Traditional Astrology uses Lagna based predictions. Here normally we consider 7th house from Lagna, its lord,2nd house and its lord and 11th house and its lord are considered along with Karaka of marriage, Shukra/Venus. But in Nadi Astrology, Guru/Jupiter is the karaka of Jeeva and indicates male natives. In female natives, Shukra/Venus is Stree/female Karaka but Jeeva Karaka remains the same ie., Guru/Jupiter. Already there is double transit theory of Guru/Jupiter and Shani/Saturn is famous and we can agree with this Sutra as an almost accurate method to predict a marriage.

Now let us know one thing is that Astrology is basically Indian whether it is traditional or Nadi Astrology. So now let us see the term Marriage. 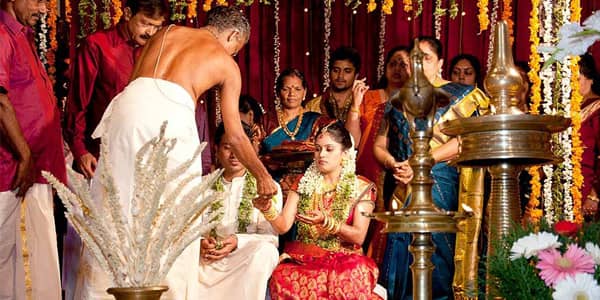 What is Marriage? It is a Karmic bond between a male and a female as agreed by the parents and relatives of both parties. Then the marriage engagement will be performed where the exact date of marriage will be fixed by the family priest/Astrologer.

Anyhow, let us come to the point that what is Mangala Sutra. It has a holy thread and a turmeric piece.The Karaka for Holy thread is Ketu and the Karaka for turmeric is Guru/Jupiter. This is because marriage is a spiritual event where Vedic Mantras are chanted followed by Havan. In the marriage after tieing the Mangala Sutra, both the bride and bridegroom have to walk 7 steps as advised by the priest which is called as Saptapadi. Now, who is the Karaka for this event? Again, Ketu. So the marriage will take place when transit Guru, Shani and Ketu transiting or aspecting natal Guru/Shukra and in a female chart, Kuja/Mars as he is Pati Karaka. So it is very clear that marriage event will not happen without the Blessings of Ketu. Sometimes transit Ketu will be in a Rashi whose Lord is connected to Karaka of Patni or Karaka of Pati ie., Shukra or Kuja. Sometimes on the marriage engagement day, the above said planets confirm the marriage. 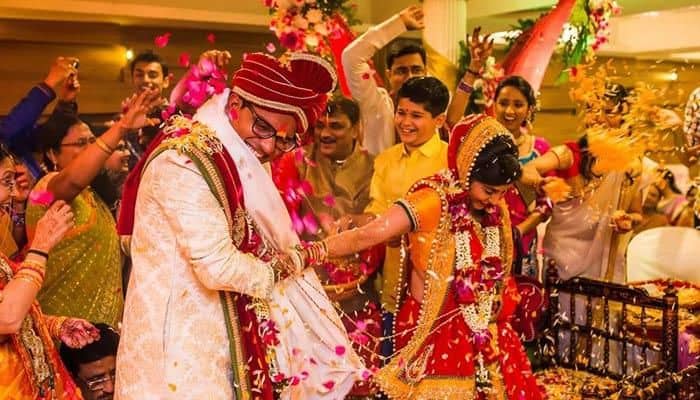 To confirm this, let me try to explain through some real example charts below : 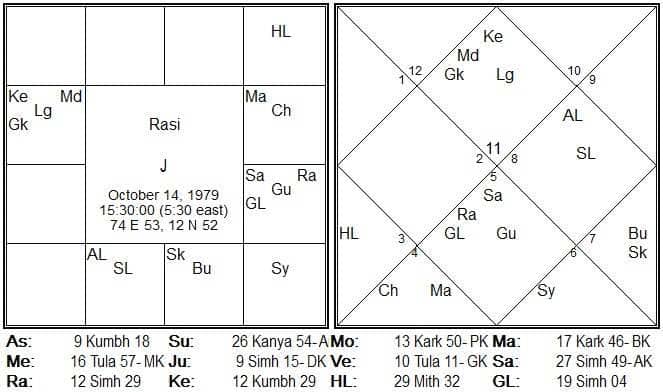 For the marriage to take place as per Nadi Astrology, transit Shani must be linked to Patni Karaka Shukra 1st, then transit Guru must be on natal Shukra or its trines. Finally transit Ketu must have a link to natal Shukra. This male native’s marriage engagement took place on 1/1/2006 at 16-30 Hrs.

Now let us see the planetary transits on this day. 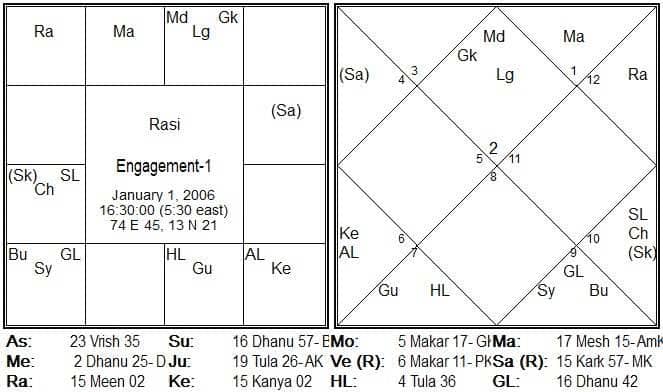 Chart-3 Female Wife of the above male chart:

Now let us look at the female chart whom she got married to the male chart 1) : 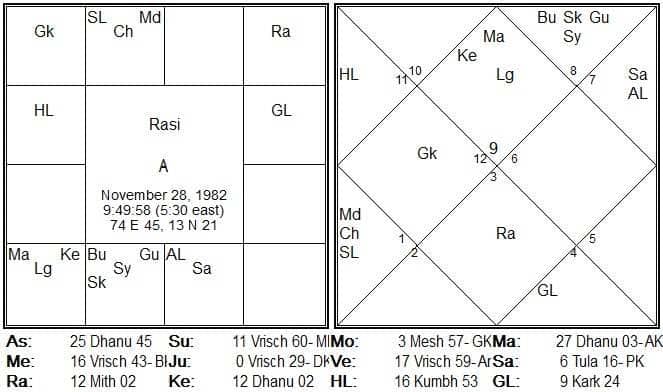 In a female chart, for the purposes of marriage, we have to consider Kuja or Mangal. So in this chart, Kuja is placed in Dhanu Rashi. Her Jiva Karaka Guru is in Vrischika Rashi. In her chart, Shani, the Karma Karaka is exalted in Tula Rashi. Marriage is also a past life Karma. Transit Guru was transiting over Tula Rashi, hence over-exalted Shani. This transit Guru was also aspecting her natal Chandra indicating after the marriage she will move to a different place. Now transit Shani as it was retrograde in Karka Rashi will be considered from Mithuna Rashi also. So this retrograde Shani from Mithuna Rashi was directly aspecting Pati Karaka Kuja in Dhanu Rashi. Transit Guru in Tula Rashi was in 11th from Pati Karaka Kuja. Finally transit Ketu was in Kanya Rashi which was in Kendra to both transit retrograde Shani and Pati Karaka Kuja in Dhanu Rashi. So all the planetary arrangements were perfect for marriage. 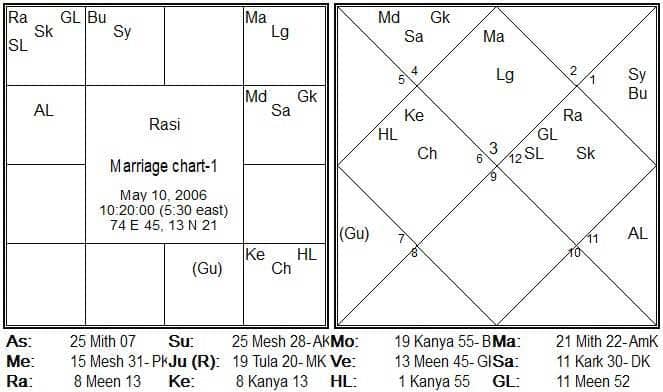 Let me take another 2 charts. 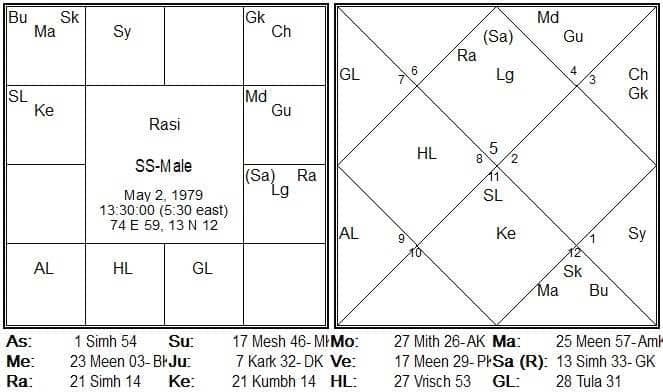 In this male chart, Jiva Karaka Guru is exalted in Karka Rashi and Patni Karaka Shukra is exalted in Meena Rashi with Budha and Kuja. This trinal linking of Shukra with Guru indicates the marriage is promised.

Now let us look at the chart of his wife : 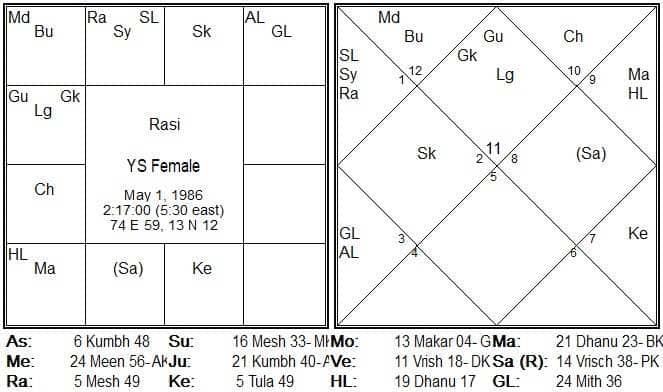 In this chart,Jiva Karaka Guru is in Kumbha Rashi and 11th from him is Pati Karaka Kuja in Dhanu Rashi ruled by Guru.So the marriage is promised to this female native.

Now let us see the planetary arrangements on the day of marriage. 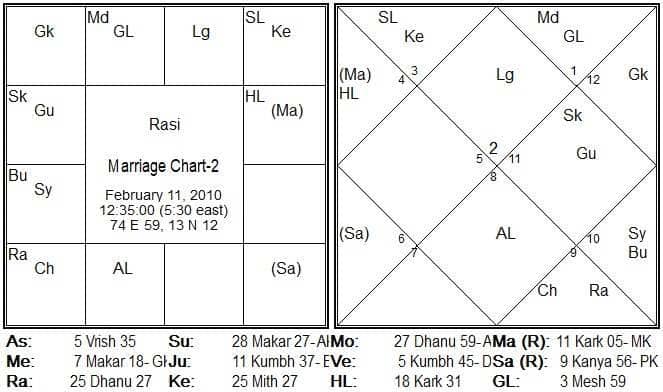 Thus we can analyse or predict the marriage of a male native through the Patni Karaka Shukra and in female chart through Pati Karaka Kuja and the transits of Shani, Guru and Ketu linking to the said planets or their sign dispositors.

Rocky Jamwal is a nature-loving, spiritual being founder of The Vedic Siddhanta research foundation, who strives to help fellow beings re-connect with the science of ancient and understanding its spiritual connection with nature, universe and their inner selves.“Despite being an IT engineer by profession, my dreams and goals were always towards researching and analyzing the mystery of life through an old and traditional astrological Medium i.e Siddhant Jyotish (Mathematical Astrology), Gola Adhaya (Astronomy), Vedic Cosmology, Vedic Astrology, Jamini Sutras, etc. The dedication to exploring the beauty of the cosmos which is beyond my imagination and studying Real-time Case Studies and research in all three branches of astrology is my hardcore passion.Thank you for being part of this Spiritual journey.
In Socials:
Who is going to win in 2019 General Elections on 23rd May 2019
The Cosmic Clock - How planets and Remedies work