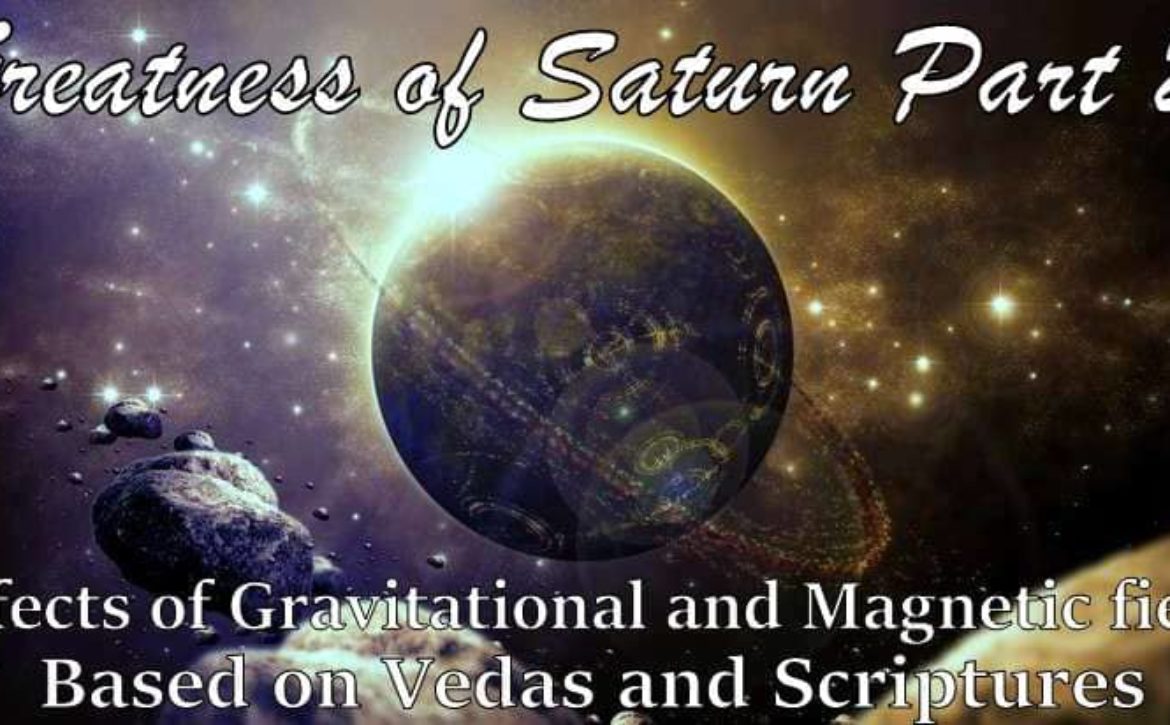 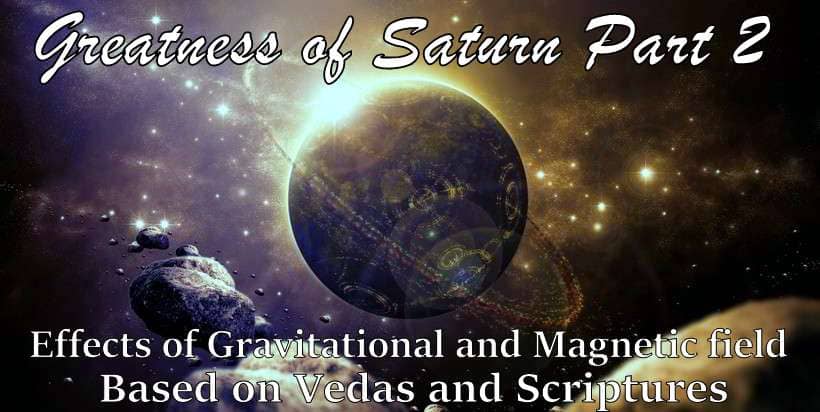 Effects of Gravitational and Magnetic field based on Vedas and Scriptures

Although Saturn is much larger than the Earth, it’s surface gravity is only a little more than the surface gravity on Earth. This is only because of Saturn is made up of mostly gases part and is not solid like Earth.
Now the question is why Saturn has such massive gravity though it is made up of gaseous structure? What contributes to all this Saturn gravity?. The element-wise core structure of Saturn is largely comprised of hydrogen and helium, which came together at the beginning of the Solar System, gathered by their mutual mass. It’s the same composition as Jupiter and the Sun have. These primordial elements were formed at the beginning of the Universe in the Big Bang if we see modern assessment but in Hindu cosmology, Saturn celestial structure and origin has a different story.This shows that the Same power which is present on Sun is also present in rest of planets too including Saturn.It’s the same force which keeps on pulling every planet to each other which the sun has.
What is that Power? Is it a Magnetic Shield or the magnetic force of attraction which we called gravity or something else? Let’s understand first, What is mentioned in Scriptures about Gravity or force of attraction, that keep on attracting every other planet in the solar system with fixed boundaries. Science has named this force of attraction -The Gravitational force of planets.

What is Gravitational Force of Planets 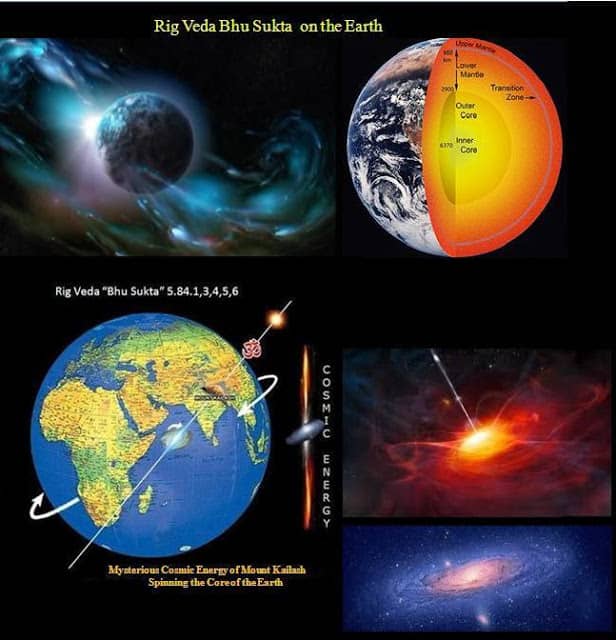 “Vaishesika Sutra” discusses the role of Gravity Deeply for every object present in this solar system or in celestial sphere and can help us in understanding how planets affect us either by aspect or by stronger magnetic attraction. everything is accountable in understanding that gravitational force:
The Same thing has been explained by Bhaskaracharya on Surya Siddhanta around 400 AD;

“Vaishesika Sutra”  describes that in the absence of conjunction (In an action) falling results due to Gravity.

In the absence of conjunction (Gurutvat) (is a process , defines the action or an instance of two or more events or things occurring at the same point in time or space.)
falling results from Gravity.
Which means something that makes progress, movement, or achieving something difficult or impossible is the process of Impediment responsible for Gurutvat.
Thus it clearly recognizes objects fall downward due to Gravity. 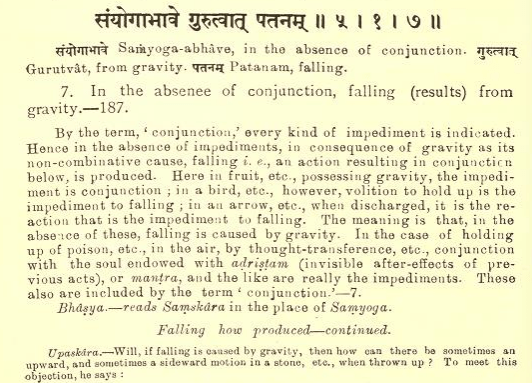 Sutra 5.1.8 States that due to the absence of a particular molecular motion there arises no upward or side-ward motion in any object causes to fall down.

Why does an object throw in air fall after some time?

Then Vaishesika Sutra discusses the role of Gravity in falling of moving objects. It gives through the analogy of arrow. First, it gives mechanism of arrow projection in Sutra 5.1.17 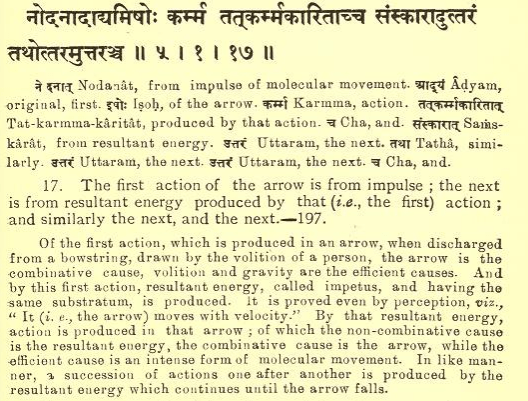 The first action of the arrow is from impulse; the next is resultant energy produced by the first action, and similarly the next to next.
Then it explains why it falls in next Sutra.

In the absence of resultant/propulsive energy generated by the action, falling results from Gravity.

Thus from the above Sutras, we can acknowledge that Vaisheshika Sutra clearly discusses Gravity. It uses the word “Gurutwa” which is also used in present time to represent Gravity. Gurutwa in ancient understanding means force which arises due to mass.

“This earth is devoid of hands and legs, yet it moves ahead. All the objects over the earth also move with it. It moves around the sun.”

Kshaa = Earth (refer Nigantu 1.1) Ahastaa = without hands Apadee = without legs Vardhat = moves ahead Shushnam Pari = Around the sun Pradakshinit = revolves and further Rig Veda 10.149.1 also says that by which force  earth and rest of planetary structure is attracted toward the sun;

“The sun has tied Earth and other planets through attraction and moves them around itself as if a trainer moves newly trained horses around itself holding their reins.”

There is clear text about GRAVITATIONAL FORCE mentioned in Rig Veda 8.12.28 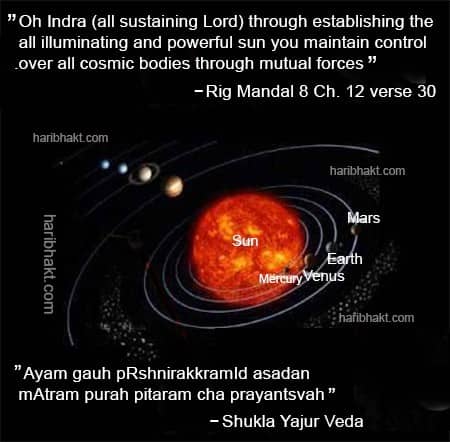 “O Indra! by putting forth your mighty rays, which possess the qualities of gravitation and attraction-illumination and motion – keep up the entire universe in order through the Power of your attraction.”

“O God, You have created this Sun. You possess infinite power. You are upholding the sun and other spheres and render them steadfast by your power of attraction.”

“The sun moves in its own orbit in space taking along with itself the mortal bodies like earth through force of attraction.”

“The sun moves in its own orbit but holding earth and other heavenly bodies in a manner that they do not collide with each other through force of attraction.”

“Sun moves in its orbit which itself is moving. Earth and other bodies move around the sun due to the force of attraction, because the sun is heavier than them”.
Atharva Veda 4.11.1 Says,

“The sun has held the earth and other planets”

From all Rig Vedic Sutras, we can confirm that Due to Sun pulling Force every planet is dire to attached and attracted toward him by a unique magnetic force and by the same force all these planets are affecting us with some sort of Planetary attraction in the form of Cosmic rays.
As we are born with the same elements those Sun and rest of planetary structure are made of, Having on their surface, the same magnetic force keeps pulling us and influencing our mental makeup, the state of mind and power of discretion in every day to day karmas. Thus Celestial bodies including Saturn does have a bigger role in our life.

“There are suns in all directions, the night sky being full of them.” (Rig Veda)” 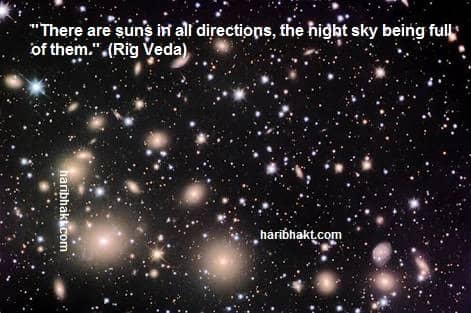 “Blue Sky is Nothing but scattered sunlight (Markandeya Purana 78.8)”

Now  ! We have understood it well, what is gravity and how different planets are well connected with the sun and its gravitational force and why because of that every planet keeps affecting us. Now, The next question is what makes the Saturn Aspects are So special in influencing our karmic actions ?. As in this portion, we have studied the Saturn mathematical and astronomical aspect. In the next portion, we will try to understand how our Puranic ancient stories are well connected with the planetary aspects and structure. we will try to figure out deep answers lie in the Puranic stories those are connected with the Saturn Evolution time.For understanding Saturn aspects part in a predictive way via natal chart , click below on continue:

Rakesh Jamwal
Source and Reference:
The Vaisesika sutras of Kanada Translated by Nandalal Sinha (Via Archive.org)

A Study of Heliocentric Science by Swami Abhedananda