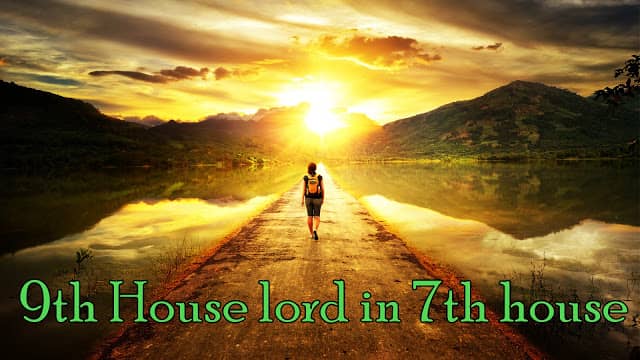 Sage have suggested that 9th house lord in 7th house is prefer to give good results generally but some of modern thoughts are views are not in good opinion for its placement because they have suggested that the most auspicious Dharma lord placement is not considered to give good results while having placement in Kaam trikona house. Because it can indicate native might do religious acts only for the sake of fulfillment of his desires not for his faith and duty. In simple terms, it can be conclude as they will be doing business of religion. Native would be having more materialistic approach in comparison with religious causes. If the 9th house lord is strong and it is well placed then it may make native very attached toward religion and religious duties and it is much possible that native could have least interest in kaam related matters. If we conclude, Both the situations are not considered as good regarding fulfilling of four purusharth of man, the primary goals of human being. Apart from this basic placement,  there are some  other yoga in chart regarding the placement of  the 9th house lord in 7th house which might indicates bad fruits for native but for that there should be some involvement of other planet and bhav lord with 9th house lord. Overall in general according to the sage parasara a single  placement of the 9th house in 7th house doesn’t  considered as bad.

According to Brihat Parasar Hora Shastra

General Indication :
When 9th house lord goes to 7th house native’s wife will be graceful and his wife brings fortune for native. Native is full with good quality and gets good fame.

When 9th house lord in 7th house, his wife may be truthful, polite, best nature, beautiful, and charming.

9th house is house of the fortune and its placement in the 7th house gives very pious and fortunate wife. Native may gain his status or prosperity after marriage. Native’s wife might has good conduct and sattvic stature or should be good in religious behavior. Native’s wife may be wise and will help native for the right direction in his life path. If the 9th house lord is badly afflicted  in 7th house then native’s wife may has weak health and could be suffering from health problems.
Both the 9th and 7th house are considered as the  house of  Travel,  9th house belong to long distance travel and 7th house also gives travel very far away place from his birthplace but for some entertainment and fun around or can say for tourist purpose. So,  native may go to abroad for foreign travel after marriage. It may also indicate that native might get good fortune in foreign places, might get good success, name and fame in foreign places. It is also possible that native’s father may lives in foreign places or  keep on moving or might be living far away from the native.

7th house is the marak house and 9th house is the fortune house so it is possible that it  might improve either the fortune of the marak house, if 9th house lord is well placed in 7th house it will protect native from marak effect of 7th house. If it is not well placed in the 7th house it can strengthen the 7th house marak effect and native may suffer due to marak effect of the 7th house. It might  give bad result to native, his spouse or could be his father might suffer.9th house belongs to  the fame and 7th house belongs to the native’s status for other, So 9th house lord in 7th house may give native good name and fame. Native could be very famous among his society, town, country, world, final result would be depending on strength of the complete horoscope. It also indicates that native become famous or popular in foreign places.

7th house represent your behavior for others and 9th house lord placement in the 7th house indicates native having good dharmic conduct with others. Native will be very spiritual person, If horoscope  promises good in strength then it may cause vairagya yog.

9th house belong to father and 9th house lord placed in 7th house which is 11th from own house indicated native’s father may be wealthy. In other words native born in rich family. But it may not consider good regarding health of native’s father. Native’s father may lives in far away place from the native or there may be thoughts difference between native and his father.

9th house belong to higher study and 7th house is bhavat bhavam house for the 4th house regarding education. So, If one has 9th house lord placement in  the 7th house, it cal also indicates native may gets higher education in abroad or foreign places. It may also indicates native may go into far away place from his birthplace to get done his higher education.

When 7th house lord is with 9th house lord in 7th house it is considered as a Rajyog. Native may be wealthy and rich. Native might get fulfillment of all his desires. Native will be fortunate regarding materialistic happiness including in women, marriage and relationship matters too. Native’s wife may be rich and wealthy and  will be from  a well off family could have good status in society. Native might gets profits from government or higher authority and could become or attain some important position in government or authority.

Note : If you want to know about the effect of different planet in the 7th house you need to read Planet in 7th house.

Decoding the Panchang : How To analyse your Birth chart via 5 limbs of system
Understanding Heat Wave of 2018 in India and climate change according to Science of Mundane Astrology

Vedicsiddhanta Research Journal Series : Download and read in-depth Analysis on principals of wheel of time based on Mundane and Vedic cosmological principals