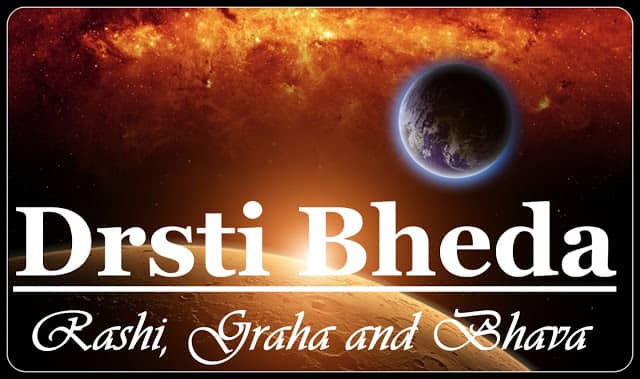 
Preamble – A few days back Shri Sunny Jain posted a question in a Facebook Group about aspects of the planet. Where he asked to suppose a planet is exalted. His aspect on a 7th house will be an exalted aspect, debilitated aspect or his effect will be according to beneficence or maleficence of planets.

My answer was only planets can become exalted or debilitated not their aspects. which means effects of aspects will be according to maleficence and beneficence of planets. [Will be dealt extensively of course]

There Shri Deepak Panchal Vishwakarma said to differentiate between Rashi Drishti, Graha Drishti, and Bhava Drishti.
Because it is to be taught in my Jyotish Prarambha course. I told that I will write a separate article on this.

This is that article.

Brihat Parashara Hora Shastra: There are many editions of this book, 10 I have in my library. 4 of them are original [written by authors] rest 6 just copied and paste from one book to another resulting in a new book.

Pandit Ganesh Dutt Pathak gave no reference on how he found the book.

Acharya Sitaram Jha made a contradictory statement when in starting he said he got this manuscript from Pandit Jeevnath Jha and copied the whole manuscript by his hand and published whereas in end he writes he collected this and published after proof-reading and correcting the manuscript.

Pandit Devchandra Jha – mentions that he got this manuscript from various Pandit’s of rural area and collected all of them and after proofreading and correcting them. Published his edition.

But one must keep in mind that it is in form of conversation between Sage Parashara and Maitreya which means it was not written by Parashara himself. [See Jaimini Sutras is written by Jaimini Itself as it doesn’t contain narrative verses]  It was written by someone else. That too not at that time but at later times. Mostly between 1400-1500’s [I am taking about BPHS available now]

Mihira also mentions BPHS in his Brihat Jataka and mentions that it is large and extensive hence he is producing a condensed version of it.

Then why he left many things like Graha Avasta [Many kinds are given in BPHS]. When one reads “Jataka Narayaneeyam and Yogavali Khandam” [ A superb book on Traditional Astrology and its secrets] one finds the author has mentioned parashara have dealt mainly with Raajyoga and Bhavaphala and have left Balarishta and Ayuryogas and only dealt with them in a condensed manner.

But, now available BPHS deals extensively with them. This leads us to conclude that BPHS was never written. But was memorized in traditions [It was done with every Shastra of Hindu’s] someone may have written it before Mihira’s time which Mihira saw. but mainly it was a book which was memorized and not written.

After invasion people saw their knowledge being lost hence some of those traditions complied BPHS in written form. The real number of Shloka, Chapter, Index is not known to us. BPHS available nowadays is a result of greed of translators and their own superimposition of limited understanding of Jyotisha along with their ignorance of traditions and their orthodoxy over words of sages [will be seen in “Graha Drishti]

My advice is if you are to read BPHS Read all available versions one by one. Don’t take any words as said by sage until you have read all editions and when you have read. try before you accept it as sage’s word. When you find contradiction in opinion between principles of Brihat Parashara Hora Shastra and other classics of astrology stick to other classics until you are very sure of BPHS’s principles [After rigorous testing]

For an example regarding AshtakaVaraga there are two opinions one is of Mihira and other of Parashara. [Will be covered in course] people who have been very successful in using Ashtakavarga have used and tied to Mihira’s method and not of Parashara’s.

Well exposed without any confusion. The word used is Rashi aspect sign in front of them and two adjacent Rashi. It have to be practised on South Indian Horoscope. Adjacent Rashi means Rashi in 4-10 to Rashi in front. Many scholars have misinterpreted that adjacent “Parshbhave” means the sign juxtapose and shloka means Rashi does not aspect sign juxtapose. But this is incorrect. Why, It will be shown in our Jaimini Article. [Here, it will make the article way too long] One can refer to my article on Sangyan Tattwa for more information.

Refer the table given below.

Planet’s placed in the sign also aspect with Rashi Drishti.

It is mentioned that “Brahma” [Creator] told about Rashi Drishti, Which means any affliction arising out of Rashi Drishti shows a basic defect in creation or manifestation. Also how to approach this subject as there can be four differentiations here, aspect by malefic but who is a friend of a lord of the sign, aspect by malefic who is inimical to lord of sign.  the aspect of benefic inimical to Lord of sign, aspect of benefic friendly to lord of sign. All this will be explored in-depth in our course.

Here you will see when people superimpose their own understanding in name of editing and proof-reading what happens.

What the sage have intended to say was all planets except Saturn, Jupiter and Mars have a full aspect on 7th house and they Saturn, Jupiter and Mars have a special aspect on these houses as their full aspect and on 7th house, their aspect is not full, but partial.
But both authors with their claim of correcting the manuscript distorted it. But Pandit Ganesh Dutt Pathak and Pandit Tarkachandra Shastri [They never mentioned correcting the manuscripts gave original table of aspects which is as follows.

This, as can be seen above was the real method Sage wanted to propagate which was mutilated in name of correcting manuscripts.
One can also see that secret of Nadi Astrology lies here. Suppose two planets are in trine Sun and Moon then Sun cast 2/4th aspect on Moon and Moon cast 2/4th aspect on Moon – Now is it illogical to say in sense that they are in conjunction [Half+Half=Full] Due to this reason while defining Sambandha between planets Mantreshwara in his Phladeepika added Sambandha between Planets in Mutual Kendra and Kona.

What do I mean by “may and may not” will be defined here?

Jupiter and Mars in 1-7 Jupiter aspect Mars by 2/4th aspect and Mars by 1/4th aspect. it makes only 3/4th aspect. Unable to form Sambandha.

Jupiter and Saturn in 1-7. Jupiter aspect Saturn by 2/4th aspect and Saturn by 3/4th aspect making 5/4 which means a Sambandha.
This way one can clearly see the differences into considerations when we follow true spirit of Sage.

Sitaram Jha and Devchandra Jha edition exposes this in a separate chapter named  “Grah Sphut Drishti Kahtanadhyaya” which can mean that this is only true aspect of planets. Whereas Devdutt Pathak and Tarkachandra Shatri edition exposes this in “Bhav Shad Bal Aadi Varnan Adhyayah” which clearly distinguishes between Graha Drishti and Bhava Drishti. Making clear that Bhava Drishti will take both full and partial aspect into consideration to judge the relationship between Bhava and Graha whereas Graha Drishti is only full between two Graha.

We need to calculate Drishti bala to know about Bhava Shadbala [Will be dealt in separate article] Two methods of calculations are given, I am giving the one given in Tarkachandra Shastri and Devdutt Pathak edition.


Calculations of Bhava Drishti: Aspecting planet is called “Drishta [A]” aspected planet/Bhava is called “Drishya [B]”
Take their longitude “Rashi-Degree-Minute” and A-B = If more than 6 then subtract from 10 Rashi and divide by 2.

These calculations can be tiring for beginners hence one is advised to take support of modern day software’s. One such Software is Jagannath Hora which is free to download. [Check settings before usage] In the software open any chart [It is easy to use] Select the option “View” above in File Bar and then choose “Aspect Table with Relationship” Then right click on New Window anywhere over blank space and choose “Full Aspect Value” and then change it to be 100.

Secrets in Usage: Graha Drishti does not take into consideration degrees of planets. In planet in aforesaid Bhava/Rashi [They are same] comes under their aspect irrespective of their degrees. But in Bhava Drshti Degrees of Bhava [Similar to that of Lagna] needs to be taken into consideration. This is the reason why Mantreshwar in his Phala-Deepika have said that planets in any bhava equalling the degrees of Lagna will give the full effect of that bhava and in other places promotionally. This also applies with their aspect. being placed in a bhava is inclusive of aspect on other Bhava.

[An operation after her birth just around 12 hours of birth near waist due to some ulcer/eruption and doctors cut the spinal veins which control veins. Now by birth she can’t be moved]

Creation Flaw: See Lagna with malefic and retrograde Saturn but in own sign [Longevity is not hampered] Rashi Drishti Venus, Indrachaap, Upaketu, and Kaal. All three of these Aprakash Graha are troublesome. It gave the problem in upbringing [health issues] abnormality is seen by Aprakash Graha. Venus being benefic and friendly makes sure that her physical growth and longevity doesn’t get hampered.

Horoscope of Bill Gates: See mutual aspect between Mercury and Moon 1st 2nd lords and 4th and 2nd lords which give a beautiful combination for making money and property.

If you consider mutual aspect between Mars and Moon it also becomes a combination between 6th and 2nd Lord which indicates debts. He is not in debt, he never was.

See Bhava Drishti for 11th house it is aspected by Sun [Authority leader in Computer operating systems] Mars [Engineering] Mercury [74 – more than 50 – For technology and
computers/communication/email’s/outlook] Jupiter [Donations and Bill and Melinda Foundation] Venus [Beautiful operating system from DOS to Windows XP] Saturn [Hard work and persistence with struggles to be at top] One can see more the planets aspects 11th house better the financial condition.

[See house lordship of these planets and match it with his Wikipedia Biography] 11th lord is apecting 11th hosue along with 1st, 4th, 7th, 10th, 5th, 9th lords. [What else one wants]