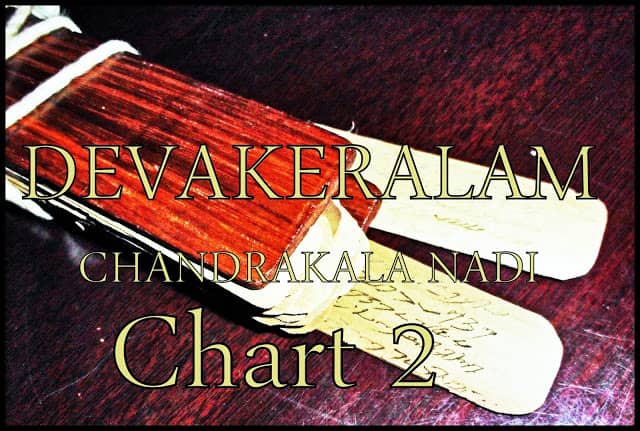 “The Sanskrit text of
Devakeralam has its own problems in its current form. Portions of some
horoscopes are incomplete or mixed up, while same horoscopes have been
explained at multiple places. Devakeralam requires thorough study, re-editing,
re-interpretation and re-translation. The initial step would be to group the
text according to the different horoscopes described. Then the conventional and
Nadi Amsa analysis applied in the interpretation of the horoscopes are to be
documented and separated into different categories based on the techniques
employed. The next step includes the extraction of general rules from this
study. Finally, these rules have to be applied on real-life horoscopes to check
their veracity.” With this statement I had concluded my article series
‘Decoding Devakeralam’.

I have translated every sloka
where the chart appears in the first instance and in the subsequent places, I
have translated only the slokas which give extra information or differ from the
first. It can be seen that the internal information within the slokas will help
rectify many corruptions in the Sanskrit text and sometimes better meaning
emerges when the text of different places is compared. I know this is a huge
project and it may take much time to finish. And perhaps, no publisher may come
forward to bring out the entire re-translation.

Hence, I am sharing my work as
and when it progresses. THIS IS NOT THE FINAL VERSION. This entire translation
is hoped to form the basis of a book where specific astrological rules
applicable for horoscopic analysis will be explained. I believe this endeavour
of mine will add value to the extant astrological literature and the learned
astrological fraternity will welcome it.

THE AVAILABLE ENGLISH TRANSLATION BY
LATE SH R. SANTHANAM DID NOT REALIZE THAT THE NADI HAS BEEN DISCUSSING COMPLETE
CHARTS, THUS LOSING THE SPIRIT AND PURPORT OF THE SLOKAS.

54. Native will be born in first
part of Abalamsha in a fixed lagna, in a brahmin family and will be dark and
handsome in appearance.

55. He will be liked and fond of his elder brother and
will be gentle in disposition. He will have troublesome childhood. He will earn
in fortune in a foreign land because of his sister’s husband.

56. The native
having Mars in the ascendant and Jupiter in the 5th house will not
have younger brothers. Even if they are born they will die.

57. He will have
two sisters and one elder brother. He will be bereft of comforts from his
father and mother.

59.
The native will live in a small village and go to a foreign country during
Sampat dasa (Mercury dasa). That place will be near Gokarna, on the banks of a
river flowing west

60. (1515. On the coast of western sea). He will roam in his
childhood suffering from the pangs of penury. But the person born in the latter
half will be fortunate in his own country.

61. He will leave his place because
of civil unrest and later come back to his native place. The native born in
Taurus ascendant with Aries navamsa will be fortunate in pilgrim centres.

62.
Later he will become prominent in the court of an Andhra ruler. The person born
in the middle portion of the first half will lose his father in his childhood.

63.
But his mother will live long. For the native who was born with Sun in the 11th
joined with Saturn,

64. Father will die in the Sampat dasa (Venus dasa) and he
will leave his native country. During the currency of the 8th lord
from the Chandra lagna and in the bhuktis of malefic planets,

65. Native will
lose his father and mother (1521. And later his mother also). The native will
have three wives

66. (1521-1522. 7th lord being aspected by Saturn
will give three wives to the native as per some scholars). He will be bereft of
comforts from his wives. When Moon occupies the first half of abalamsa, and
being aspected by the 12th lord,

68-70. And Saturn occupies the 11th house,
the native will face difficulties in begetting children. In the latter half he
will be very wealthy (1524. He will suffer serious disease) and otherwise, his
elder wife will be kakavandhya (lady giving birth to a single child). In the
first half, he will not have sons. But as per some other texts the native will
have a son after delay (1526. Will have a son after delay through his 2nd
wife). When Jupiter occupies the 5th house aspected by two malefics,

71. The native had a curse from a Brahmin from his earlier life. To ward off
this sin, he should do sethusnana and worship lord shiva. (1528. By donating
the idol of Nagalinga he will be blessed with progeny)

72-73. By the blessings
of lord Nageshvara, the native will beget children. He should observe fasting
on Mondays as prescribed in the scriptures and should donate palam or half of
the amount in the evening after pradosha puja. The native who was born in the
first half of abalamsa and having Sun in the 11th house,

74. Will be
blessed with sons without any doubt after observing Bhanuvratha. Jupiter being
the 8th lord and joining the 5th house aspected by
Saturn, 75. Indicates destruction of progeny. By the blessings of nageswara,
the native will be blessed with little progeny in his old age.

79. For the native born in first
half, a sister will be bereft of children and suffer widowhood. When the 3rd
lord occupies nirmalamsa,

83. The native’s mother will expire
after his father’s death. For a native born in the middle portion of the first
half, mother will predisease his father. 84. Death will happen in the Sampat
dasa (Mercury dasa) after native completes his 10th year. The
native’s parents may die in his 8th or 12th or 16th
or in the 24th year.

85. When the Moon is placed in
vargottama in Scorpio, the junction of the Vipat dasa (between Mercury and Ketu dasa) will be unfortunate.

86. For a native born in first half Manu said that
the native’s parents will leave the native country and die in a foreign place. 87.
The minute timing of these things should be fixed based on the prasthara
ashtakavarga. This will be explained at some other place.

88. When the 10th
lord occupies his exalted navamsa, the native will have knowledge of Vedanta
and will follow the vedic way of life. (1542-43. He will do ahnika karma –
prescribed daily rituals- every day and will have great devotion).

90-91. He will be of pure and calm disposition, will be
eloquent and devoted to shiva and Vishnu. After his 10th year, he
will be uprooted because of a civil unrest. After his 12th year he
will roam about in various countries and will suffer a lot because of the loss
of his parents.

92. He will ultimately live on the banks of a great river and
start enjoying great comforts from the end of Vipat dasa (Ketu dasa).

93. The
native will have great fortune during kshema dasa (Venus dasa) and will face a
grave danger during his 40th year.

94. After his 30th
year the native will enjoy great fortune after the change of the ruler. As per
the transit of Saturn he will suffer yogabhanga and mental affliction. (1547.
When transit Saturn moves in a sign that is in trines to the navamsa sign
occupied by the 10th lord, the native will suffer yogabhanga and
mental affliction as per the transit effects of Saturn)

95. When transit Saturn
moves in a sign that is in trines to the navamsa sign occupied by the 6th
lord, the native will suffer great difficulties. He will attain to normalcy
after performing remedies (1548. He will leave his country).

96. During the
dasa of the 4th lord Sun the native will enjoy great comforts. The
native will take to apatsanyasa and leave this world during the currency of the
8th lord dasa (Jupiter dasa). (1549. During the dasa of the ascendant
lord the native will have great wealth. But he will die in the dasa of the 7th
lord Mars after taking to apatsanyasa – Sanyasa taken in extreme situations like
impending death when there is no possibility of taking Sanyasa in prescribed
way).