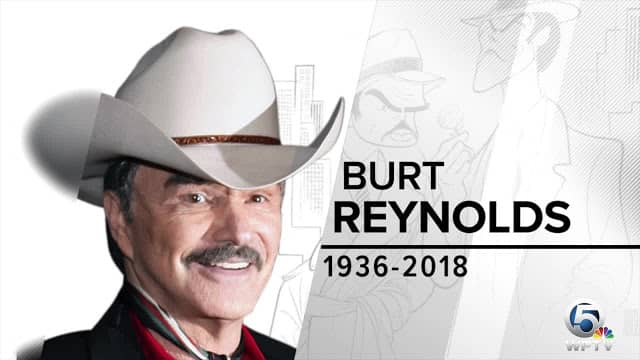 What is Heart Attack ?

If you believe that you are having the symptoms of a heart attack, please call 911 immediately and seek medical attention. The heart is a muscle like any other in the body. Arteries supply it with oxygen-rich blood so that it can contract and push blood to the rest of the body. When there isn’t enough oxygen flow to a muscle, its function begins to suffer. Block the oxygen supply completely, and the muscle starts to die.

What Causes a Heart Attack ?

Over time, plaque can build up along the course of an artery and narrow the channel through which blood flows. Plaque is made up of cholesterol buildup and eventually may calcify or harden, with calcium deposits. If the artery becomes too narrow, it cannot supply enough blood to the heart muscle when it becomes stressed. Just like arm muscles that begin to ache or hurt when heavy things are lifted, or legs that ache when you run too fast; the heart muscle will ache if it doesn’t get adequate blood supply.

This ache or pain is called angina. It is important to know that angina can manifest in many different ways and does not always need to be experienced as chest pain. If the plaque ruptures, a small blood clot can form within the blood vessel, acting like a dam and acutely blocking the blood flow beyond the clot.

When that part of the heart loses its blood supply completely, the muscle dies. This is called a heart attack, or an MI – a myocardial infarction (myo=muscle +cardial=heart; infarction=death due to lack of oxygen). 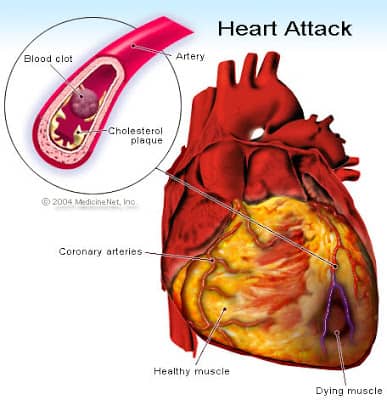 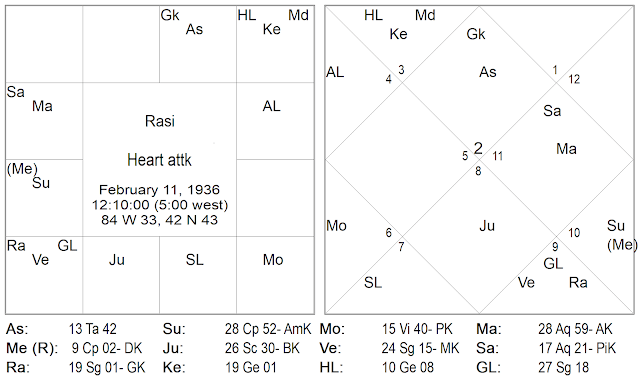 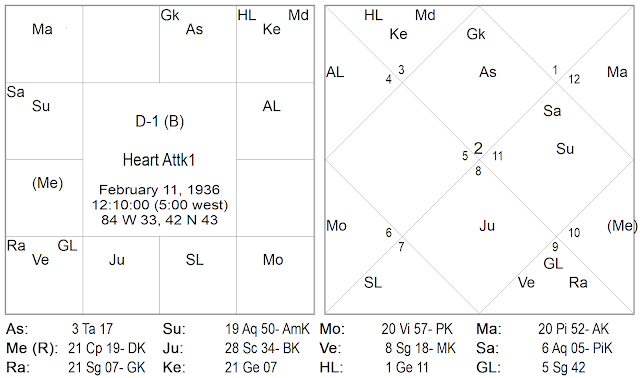 The circulatory axis in natal chart is afflicted on two points Aquarius and Sagittarius ,while the sign and house having Leo sign is under malefic influence ,lord of Leo sun is hemmed in malefic s along with 3rd and 5th lord mercury ,sun is the fourth lord ,the karak of 4th and planet moon is also under malefic influence from Saturn through the 8th aspect of mars,karak of 5th Jupiter is also under the malefic influence since the lords of 4th ,5th ,natural sign lords of kaal pursh and sign lords are all in malefic influence ,the involvement of circulatory axis again with malefic points to a cardiac problem.
He had triple bypass surgery in last week of Feb in the year 2010. Sun/Venus/Jupiter in Aquarius ,Rahu in Sagittarius ,Saturn in Virgo in 5th house of natal over moon.
Mars in cancer and mercury in Capricorn.Again the stress is on cardiac related axis and body organs.

At the time of his death Saturn is in transit on Sagittarius ,rahu in cancer and ketu in Capricorn ,sun in Aquarius ,Mercury /Venus in Pisces,Moon/Jupiter in Libra,mars in Scorpio. Dasha Mercury -Saturn .Mercury is lord of 2nd a marak.