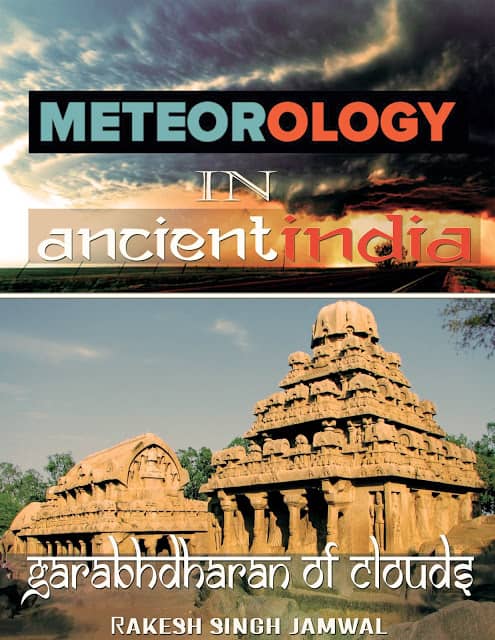 Astrological weather prediction of India and understanding the Ancient Science of Astro-meteorology
The Process of Vayu-Dharana or GarabhDharana
Compiled and Written by
Rakesh Singh Jamwal
Weather and Meteorology of ancient India
“According to one indigenous theory established in the Upanishads, the universe consists of five basic elements 1. Earth or land, 2.water, 3. light or lustre, 4. air and 5. ether. Nature has maintained a status of balance between and among these constituents or elements and living creatures. A disturbance in the percentage of any constituent of the environment beyond certain limitsdisturbs the natural balance and any change in the natural balance causes lots of problems to the living creatures in the universe.Different constituents of the environment exist with set relationships with one another. The relation of the human being with an environment is very natural as he cannot live without it. From the very beginning of creation, he wants to know about it for self-protection and benefit.”

(Reference: Origin of Environmental Science from Vedas by Sashi  Tiwari)
According to Vedic Principals, the world consists of Agni i.e., fire or heat and Soma (Varun) i.e. water, 12 forms of Sun (Surya – aditya ) and is the soul of all for those are being and for those who aren’t living being. Nature controls by Indra who is the most powerful god and who kills Vritra, the symbol of the cloud to free waters. Vritra means one who covers and is derived from the root vri, to cover.
According to R.R.M. Roy the main force of expansion in the Vedic cosmology is Indra, and his chief adversary, the main force of contraction, is Vritra and Maruts are Indra’s associates. Vedic seers pray boldly to these natural forces and aspects for bestowing plenty and prosperity on them. Devi Aditi is praised as Devamata – the mother of all natural energies and she symbolizes the nature and forms of water is considered essential to all forms of life.
According to Rig-veda, the water (‘APAH’ ) as a part of the human environment occurs in five forms:
1. Rainwater (Divyah)
2. Natural spring (Sravanti)
3. Wells and canals (Khanitrimah)
4. Lakes (Svayamjah)
5. Rivers (Samudrarthah)
All the 5 elements are merged in Prakriti. According to the Bhagavad Gita, the basic nature of intelligence by which the Universe exists and functions is called Prakriti. It is described in Bhagavad Gita as the “primal motive force”. It is the essential constituent of the universe and is at the basis of all the activity of the creation. In Sankhya, philosophy prakriti is comprised of eight elements: earth, water, fire, air, space, mind, intellect and ego. It is characterized by the three gunas: Sattva, Rajas and Tamas. Prakṛti is female while purusha is male.
For complete Journal, Download and View from Scribd